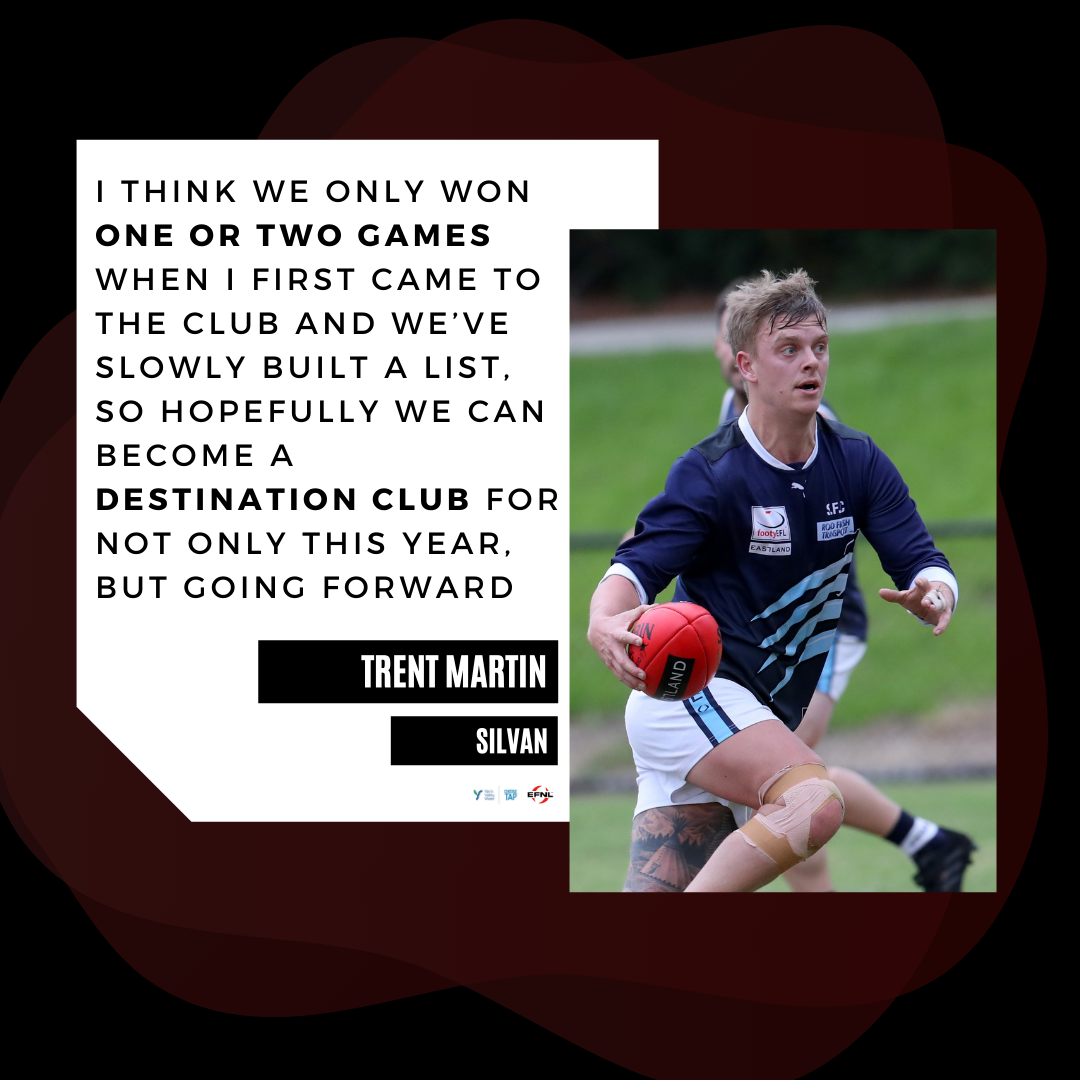 Undefeated and standing strong, Silvan Cats remain the team to beat in Division Four as they bagged another big win on the weekend over Kilsyth.

The Cats rolled Kilsyth by 141 points on the weekend as the young side continued to impress coach Trent Martin.

“Kilsyth only lost by one point to Chirnside Park who are ranked pretty highly the week before, so all the young guys [such as] Bailey Calderwood, Matt Steiniger, Matthew Low, Tyson Bissels, stepped up really, it was great,” said Martin.

Martin is quite confident his players will be able to keep the winning streak going, regardless of how tough the competition may be.

He believes that if Covid hadn’t interuppted, Silvan would have finished strongly last season and potentially could have walked away with the premiership.

“We’re confident if we finished the year last year, we would’ve made finals and we could’ve taken it up to Coldstream even,

“We are confident with our list and just waiting to see all the other teams, but we are quietly confident on what we have achieved, and we know if we stay healthy, we could give it a shake,

“We knew we would be up at the pointy end this season.”

With new additions and depth to Silvan this season, they have been unstoppable with the aim for taking home the flag this season.

“James Charge is a big difference getting a ruckman, a genuine ruckman over from Mooroolbark was probably the last piece of the puzzle we needed so he’s been a big difference,

“Just because we’ve got a ruckman now we can play with a bit more confidence now in midfield and obviously the forward pressure we’ve got a small forward line, we can put a lot of pressure on,

“The basic structure has stayed the same, we’ve more changed the personnel,

“It would be a nice cherry on top to actually win the flag which is hopefully which we are on track to do this year.”

However, Martin is unfortunate he hasn’t been able to show off his best side yet due to players being missing in action.

“We still haven’t had our best team together yet I don’t feel,

“We’ve had a bit of a disruption with kids going away, there’s a couple of kids in the army, ones a paramedic so were sort of rotating some kids through due to some work related omissions,

“But we knew coming into the season who would miss what games so were probably still four or five short of our best every week.”

Although there are players who can’t commit to every weekend game, there is still a lot of work needed to put into training and games together as a full team.

“We definitely have a lot to improve [and] I think there’s some big games ahead,

“We’re playing Surrey Park at Surrey Park which is going to be a big game in a few weeks’ time for us,

“There’s a lot of pressure from within which is driving the group pretty hard, and I think were still got a bit of improving to do that’s for sure.”

Silvan are set to play against Forrest Hill next week with a lot of confidence in his boys to pull out a win and keep the streak going.

“We’ve had some good success with Forrest Hill in the past, our season finished off last year with a big win out there,

“I think that we’ve got a pretty good structure, we set up well behind the footy and I think our forward line is going to be too potent for most teams to defend in the cult to be honest.”

Although not every team is able to finish a season off with an undefeated record, it is an aim for Silvan no matter how difficult it is.

“It’ll be tough, I think that with the road we’ve got coming home with players missing it’ll be tough but that’s the goal,

“We’ve come this far, and we’ve got to look at every team,

“As I said we have some tough games, Chirnside I think we haven’t seen them at their best, Surrey Park are always hard.”

However, no matter the score at the end of the season, Martin is extremely happy with how far the team has come over the years.

“When I got here five years ago, we started from the bottom, so we’re happy where we’re at,

“I think we only won one or two  games when I first came to the club and we’ve slowly built a list, so hopefully we can become a destination club for not only this year, but going forward.”