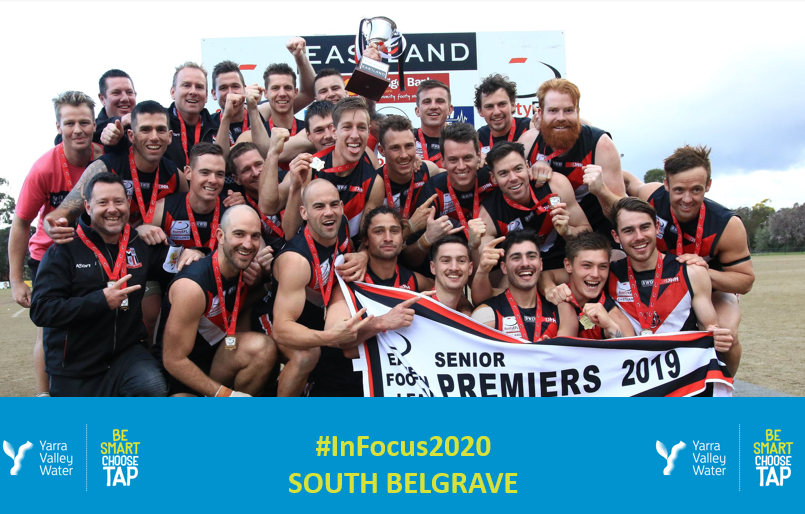 2019 was a landmark year for the South Belgrave Football Club.

A treble of premierships to the under 19’s, reserves and senior teams capped off a momentous season at the club. It was particularly sweet for the senior team, who added the appropriate post script to it’s perfect season – the first time this milestone has been reached in the EFNL’s third tier since Ferntree Gully in 2016.

Despite the season of immense success at the club, senior coach Luke Galliott is in no way resting on his laurels in his second season at the helm, with his attention firmly focused towards 2020 and the challenge of Division 2 football.

“Pre-season is going well and we’re certainly ready to go. The boys are really looking forward to the season proper,” Galliott said.

“To be honest, with all this coronavirus stuff in the back of our minds we’re wondering if we’re going to get there.

“Our practice match against Upwey-Tecoma was a good hit out. We certainly didn’t have our best 22 out on the park but we had a pretty comprehensive win under tough conditions.”

The Saints have also recruited additional pieces to supplement their core group for the upcoming season.

The most notable coup for the Saints this year is the signing of Tim Smith.

Smith retired from AFL football last year due to injuries after 13 games with Melbourne and will be re-united at South Belgrave with his brother, Mike. Smith last played in the EFNL in 2012 with Upper Ferntree Gully.

Trent Castledine has come across from Vermont after several seasons at Terrara Road. Jamie Plumridge and Devon Smith will also suit up for the Saints after joining from Beaconsfield in the AFL Outer East. Joining them is Ryan Silver and Darcy Wilson, who both played last season with Daylston in the West Gippsland Football Netball League.

Corey Wakefield and Luke Wakefield have also made the move to South Belgrave from Daylston, after previous seasons at Upper Ferntree Gully.

“We’ve got 7 or 8 new guys that are probably going to play each week,” Galliot said.

“We’re definitely going to be stronger than we were last year.”

Galliott is also looking to the under 19’s for more potential senior football opportunities for the up and coming senior players of the future.

“We had great success in all three grades including the under 19’s last year,” Galliott said.

“There’s certainly a few kids in the 19’s that will play senior footy, if they stick at it this year.

“We gave a couple a go on the weekend in the practice match, Ash Butler and Louis Nichols. Then there’s guys like Lachie McGill, Alex Bennett, Chris Dergacz and others that will get their opportunities throughout the year should they be consistent.

“We’ve got a good core. I think our 19’s this year, along with our reserves and seniors, will be very competitive.”

Galliott is also looking forward to the faster tempo of football that promotion in the ENFL brings.

“I think games are going to be more competitive for longer compared to what we faced last year,” Galliott said.

“The main test for us will be if we’re able to compete for the full 120 minutes against the better sides we have to play this year like Ringwood, Boronia and Knox.

“However, I think that all 8 clubs in this division are going to be really hard to beat on their day.

“There were some games last year that we won comfortably and I’m not sure we got a lot out of that.

“I think this year knowing what opposition we’re facing and the more competitive games of footy we’ll be playing, that the club is really excited about this season both on and off the field.”

The South Belgrave women’s side will also be back in action for 2020, after a highly successful debut year in the Deakin University Eastern Region Women’s competition.

After a tough regular season, the SBL Wolves finished second on the South Division ladder with 11 wins and 3 losses. Their finals campaign finished up just short of claiming the premiership, going down by only 7 points in the grand final to Rowville in a thriller.

The club will be looking to go that one step further and capture the premiership this season, under the tutelage of second year coach Simon Mehegan.