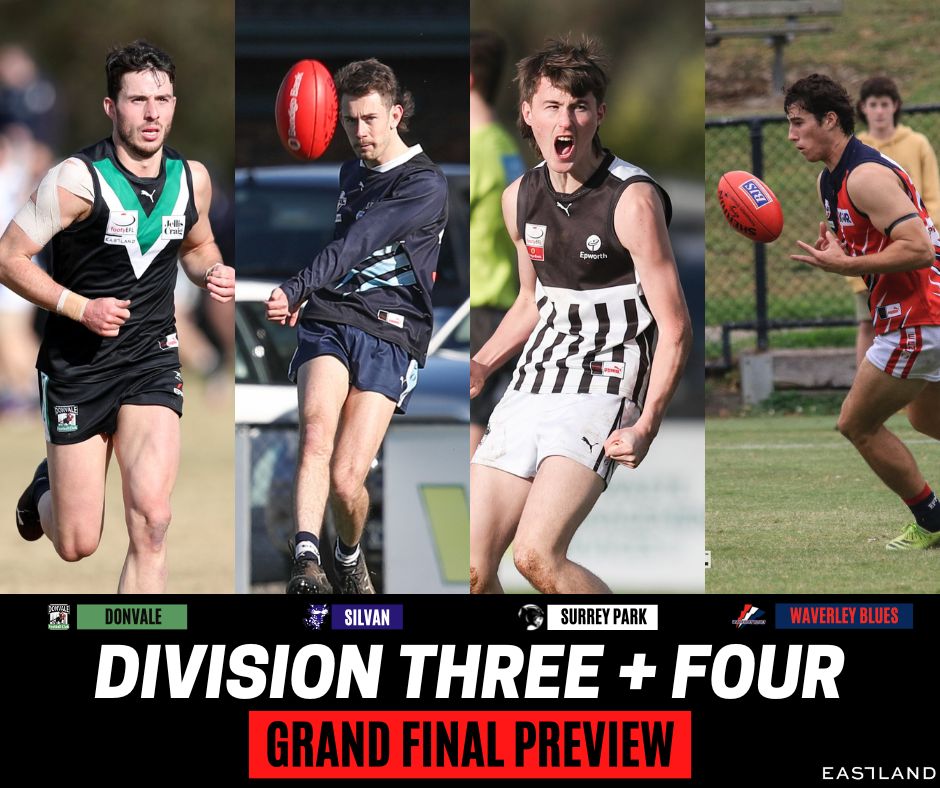 After three long years, Senior EFNL Finals are back, as Waverley Blues look to complete an incredible run against a determined Donvale side who have come from third, whilst Surrey Park are the final hurdle Silvan must climb en route to the Division Four Premiership.

The unstoppable Waverley Blues will be put to the test for the Division Three Premiership against an in-form and determined Donvale, who stormed Warrandyte in a frantic first half last weekend to book their spot.

It’s been one of the Blues strongest seasons in recent memory, having lost their only game by two points against Warrandyte back in the first round of the season. Victory would see them win their first premiership since their 2008 triumph over Mooroolbark in Division Three.

Whilst the Blues will be without Matthew Perry due to suspension, they’ll still have their leading goalkicker at their disposal in Josh Williamson, who has kicked 16 goals in the Blues previous two meetings with Donvale.

Omar Mohammad (22 goals), Daniel Playsted (21), Tonn Steele (18) and playing coach Tom Langford (17 in 12 games) have also supported Williamson in his first season with Waverley, with the Blues one of the most ruthlessly offensive sides in recent history.

Donvale though come into this game brimming with confidence having won their last three matches against Coldstream (twice) and Warrandyte in last weekend’s Preliminary Final.

If the Vales were to win on Saturday it would be just under five years after their Division Four premiership over Forest Hill and their second since coming out of recess in 2015.

Senior coach Kevin Collins said in the lead up to this game that victory for his young side would be a tremendous achievement.

“(Waverley Blues) are a fantastic team, they work really well, they have good balance inside and out, it’ll be a real challenge, but we think we’re up to the challenge.”

Collins added that playing finals opponents in the last few weeks, plus Ferntree Gully – a side many suggest should’ve made finals on talent levels alone – has helped his side get into the position they’re in.

“We’ve been playing finals the last five weeks and that’s what it’s all about, that’s how you gauge how you’re going and it’s been a great experience for our boys.”

They have plenty of firepower up forward too, with Nick Murphy once more leading the way up there, kicking eight in the Magpies two finals.

Despite the attacking weapons both sides possess aerially and on the ground, Collins believes that this game will be won in midfield.

“We believe that we’ll be able to stem their flow into that forward line and cut off the supply through some vigorous work between the arcs.”

The match kicks off at 2:15pm at Jubilee Park and will be broadcast live on the EFNL’s Facebook & YouTube pages plus on the SEN App and simulcast on 98.1 Eastern FM.

The all-conquering Silvan will battle it out with a Surrey Park side full of confidence for the Fourth Division Premiership this Sunday.

After continuing to grow following their drop from Division Three in 2016 the Cats became a dominant side this year, comfortably passing every challenge that passed them. It would be the club’s second EFNL flag if they are to win on Sunday, with their first coming in 2014.

Their attack has been one of the most dominant one’s across every division, averaging 152.9 points per game this season and only dropping three times below 100 throughout it.

Ex-Croydon forward Leigh Kimpton led the way and became one of only a few to surpass the 100 goal mark in the EFNL, doing it in only 15 matches.

The side that has restricted them to double digits all three times though (Surrey Park) come in off the back of an impressive second half in the Preliminary Final which saw them thump Chirnside Park by 111 points.

It’s set to be a historic day for the club, with the seniors playing in Grand Finals for the first time in 23 years. If they were to prevail it would see them win their first ever premiership since their establishment in 1995.

Interim playing coach James Kenworthy recently said that Sunday would be one of the biggest days in the club’s history.

After taking over halfway through the season from David Jensen the Panthers have taken their game to another level, winning nine of their last 10 to push themselves into second spot and a grand final spot.

Kenworthy added that victory here would be a reward for effort after the side put in a lot of hard work since he came in.

“Just love how the boys have gone about it, me coming in halfway (I give) full credit to them, it’s all the players that are putting in the hard work and now they get the rewards.”

Much like his Division Three counterpart in Kevin Collins, Kenworthy believes the game will be won in midfield.

“We’ve been saying it all along, but if you look back at the tapes and all the games it’s clear midfield dominance.”

The match kicks off at 2:15pm at East Burwood Reserve and will be broadcast live on the EFNL’s Facebook & YouTube pages plus on the SEN App and simulcast on 98.1 Eastern FM.