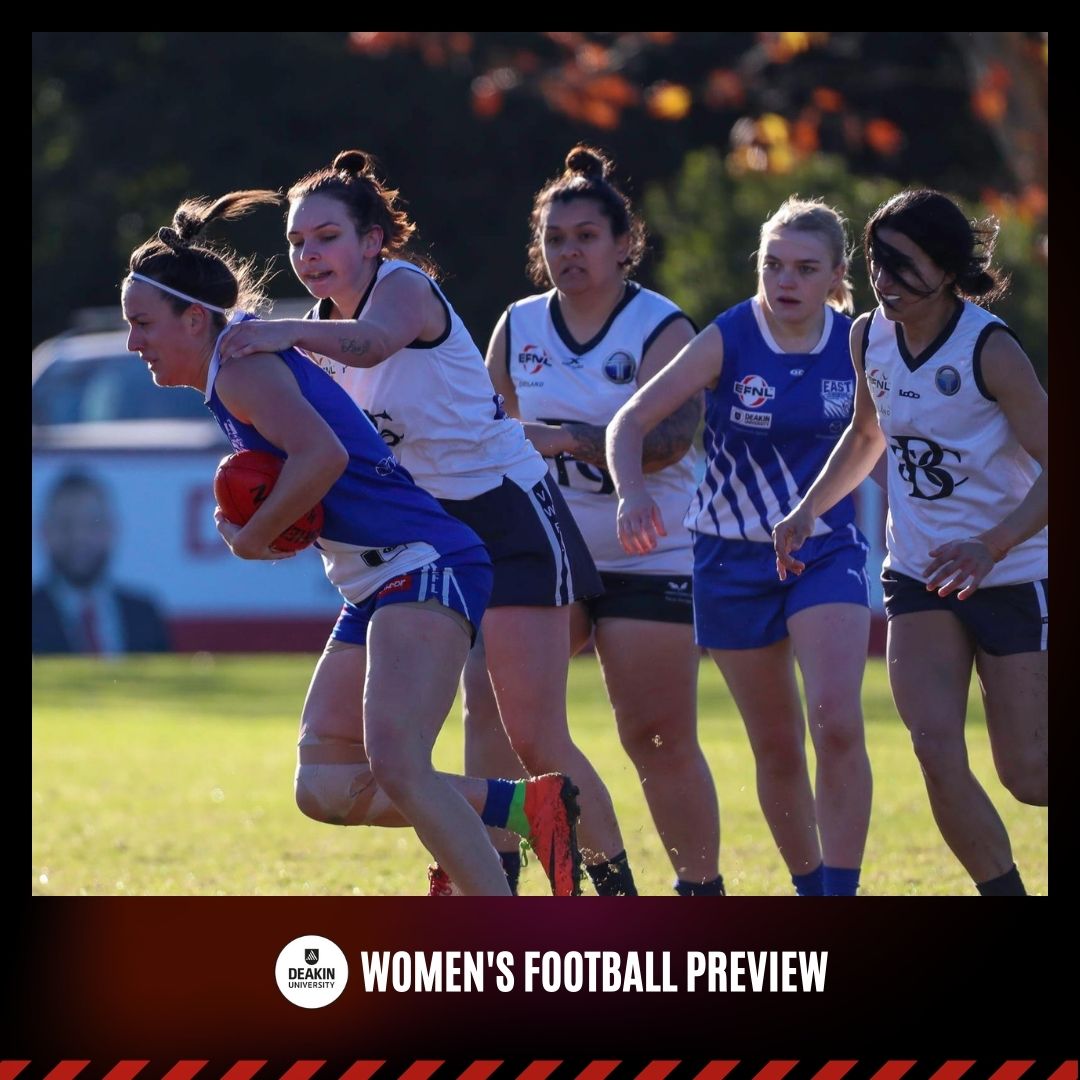 Round 5 of the Eastern Football League Women’s competition is near and now is a good time to read Tash Gunawardana’s Weekend Preview.

Mount Evelyn vs Boronia: It is the crossover Premier and Premier B match with the last placed Mount Evelyn taking on the second last Boronia at Mt Evelyn Reserve. Boronia will head into this match as favourites simply because they have won two matches this season (equal first, just second last based on percentage) and Mount Evelyn are winless. But with the match at Mount Evelyn’s home ground, Mount Evelyn could get the four points with the home ground advantage.

Vermont vs South Croydon: Vermont will be in search of their fourth consecutive victory of the season when they host South Croydon at Vermont Recreation Reserve. There is a lot on the line in this clash with Vermont one ahead of South Croydon, so if South Croydon win on Saturday they could be equal first and on the same number of wins as the Eastern Devils and Vermont. The top of the Premier Division Women’s ladder could become even tighter after round 5.

Vermont: “South Croydon have had the better of us in our last few contests, and they are coming off a loss, so it will be a good test for us to see where we are at,” Senior Coach Tim Da Silveria said.

South Croydon: “Our team are pretty eager to get back on the park and atone for some disappointments of Round 4,” Senior Coach Simon Hammersley said. “The game this week is shaping up to be a great contest between two sides that were evenly matched in 2021. With a focus on getting back to our brand of footy this week against a talented Vermont side, it’s sure to be a game worth a watch.”

The Basin: “Should be a really good game against Whitehorse off the back of some really close games last year,” The Basin Senior Women’s Captain Julia Baker said. “We will be looking forward to taking advantage of our home deck and moving the ball quickly to utilise our strong forward line.”

Ferntree Gully vs Donvale: Ferntree Gully hosts Donvale at Wally Tew Reserve and they will be hoping they can get their first win on the board for 2022 and kickstart their season. It will be a challenge for Ferntree Gully especially because Donvale know that if they win on Saturday that they could go top of the ladder pending if other results in the division go their way.

Ferntree Gully – “Looking forward to playing Donvale, who we’ve never played before, and we know have a strong history in women’s footy,” Senior Coach Tim Cavanagh said. “We’re a little light for personnel this week but are confident the players we’ll have lining up will give it a real shake and maybe cause an upset against the odds.”

Chirnside Park vs Rowville: Rowville heads to Kimberley Reserve to try and extend its undefeated streak against Chirnside Park. Rowville have been the premier team of Division 1 and it will take a lot from Chirnside Park to be the first team season to overcome Rowville, but they do have the home ground advantage so who knows if Chirnside Park play well on their home deck anything is possible. Could an upset be on the cards?

Blackburn: “We were really pleased with the effort of our squad in Round 4,” Coach Jules Hanson said. “It was certainly a game where the scoreboard didn’t reflect the efforts of our players. We continue to work and set our own team goals each week, and consistently the squad is achieving these on game day. We had a session this week with a rugby squad, so this was great cross code learning for our team. We’re excited for Round 5, and we look forward to continuing to expand the knowledge and experience of our young group.”

Heathmont vs Surrey Park: Heathmont plays Surrey Park at HE Parker Reserve. Surrey Park currently has three wins, and they will be hopeful they can defeat Heathmont and move to equal first on the ladder.

Knox vs East Ringwood: East Ringwood will look to become the first team to defeat Knox at Knox Gardens Reserve. It will be a tough task for East Ringwood, as Knox are a well drilled and quality side. On paper it looks like Knox will secure a solid victory as they are a class above East Ringwood.

Knox: “The girls are playing some very good football with Ella Ritchie, Emily Vine and Tamara Stocks having strong games last week,” Coach PJ Jordan said. “We have East Ringwood this week whose recent results have been pretty good which will present us with a strong challenge this weekend. I’m expecting a very close encounter on Saturday.”

East Ringwood: “Big challenge this week against the top side, the last we haven’t played,” Coach Adrian Fittolani said. “We’re eager to test our game plan and the things we’ve been training, hoping to topple the ladder leaders.”

Montrose vs Kilsyth: Montrose hosts Kilsyth at Montrose Recreation Reserve. This clash features two of the bottom teams in Division 2 and only two points separates both teams on the ladder as Montrose only has a draw to its name and Kilsyth one win.  Both teams are evenly matched, so expect a tight tussle between Montrose and Kilsyth.

Montrose: “Even though we didn’t come home with a win against Surrey Park, very proud of the women to keep our opposition to its second lowest score,” Coach Shilette Baker said. “Our pressure was great, and we had some promising passages of play, but couldn’t capitalise on them. There are never any easy matches in this division, so another challenge against Kilsyth this weekend. We hope to show our tenacity and string more play together that results in scoreboard pressure. A good test to see if we can get our first win on the board.”

Kilsyth: “We’re up against Montrose this week,” Coach Clint Martin said. “They have pushed the top sides so it will be an interesting game. The girls are in good spirits especially when several of them are playing in different positions.”

Croydon North MLOC: “Our team of 22 players has this week been hot by Covid – 7 players out this week,” Coach John Hayhurst said. “Our coaches and players have been reaching out to people and friends trying to get enough to accommodate Mooroolbark this week. We have managed to get 17 players together. Some permits and transfers are being processed; we have come off two very good four strong quarter games. We are looking forward to this Saturday as at one stage we thought we were not going to play.”

Mooroolbark: “Whilst its never pleasant suffering a 20-goal defeat against a talented group of young players its clearly demonstrates what we need to strive for to play competitive football at a higher level,” Coach Dom Ciancio said. “It was also pleasing to see some of the training pay off. We will continue to learn and improve with every outing.”

Mitcham vs Fairpark: Fairpark clashes with Mitcham at Walker Park. Both teams have one win each and Fairpark are ahead on the ladder because they have a higher percentage of 80.81% compared to Mitcham’s 56.12%. Expect a close match between two sides that are quite even.

Vermont Gold vs The Basin Green: Vermont Gold hosts The Basin Green at Vermont Recreation Reserve and both teams will be eyeing off the top ladder position with a strong win on Saturday. The winner from this match could go outright first if other results go their way across the Division.

Vermont: “We are looking forward to the challenge of playing The Basin at home, will be a great opportunity with second playing third, the coaching team are excited by the improvement we are seeing in the Development Team each week,” Coach Brett Munyard said.

The Basin Green: “We know that this week’s game brings us a challenge,” Coach Kirsty McConnell said. “Vermont will be keen to showcase both teams at their home and they have been able to also get some wins on the board. But I know our girls are resilient and the perseverance they have shown over the past three weeks has been nothing short of impressive. We will bring everything we’ve got to this game and will leave nothing on the table.”

South Croydon Red: “Every game of football presents new challenges and this week against Boronia is no different, but we will prepare for this game just like any other game,” Coach Declan Burke said. “We feel if we execute our game plan and hold our structures the score will take care of itself.”