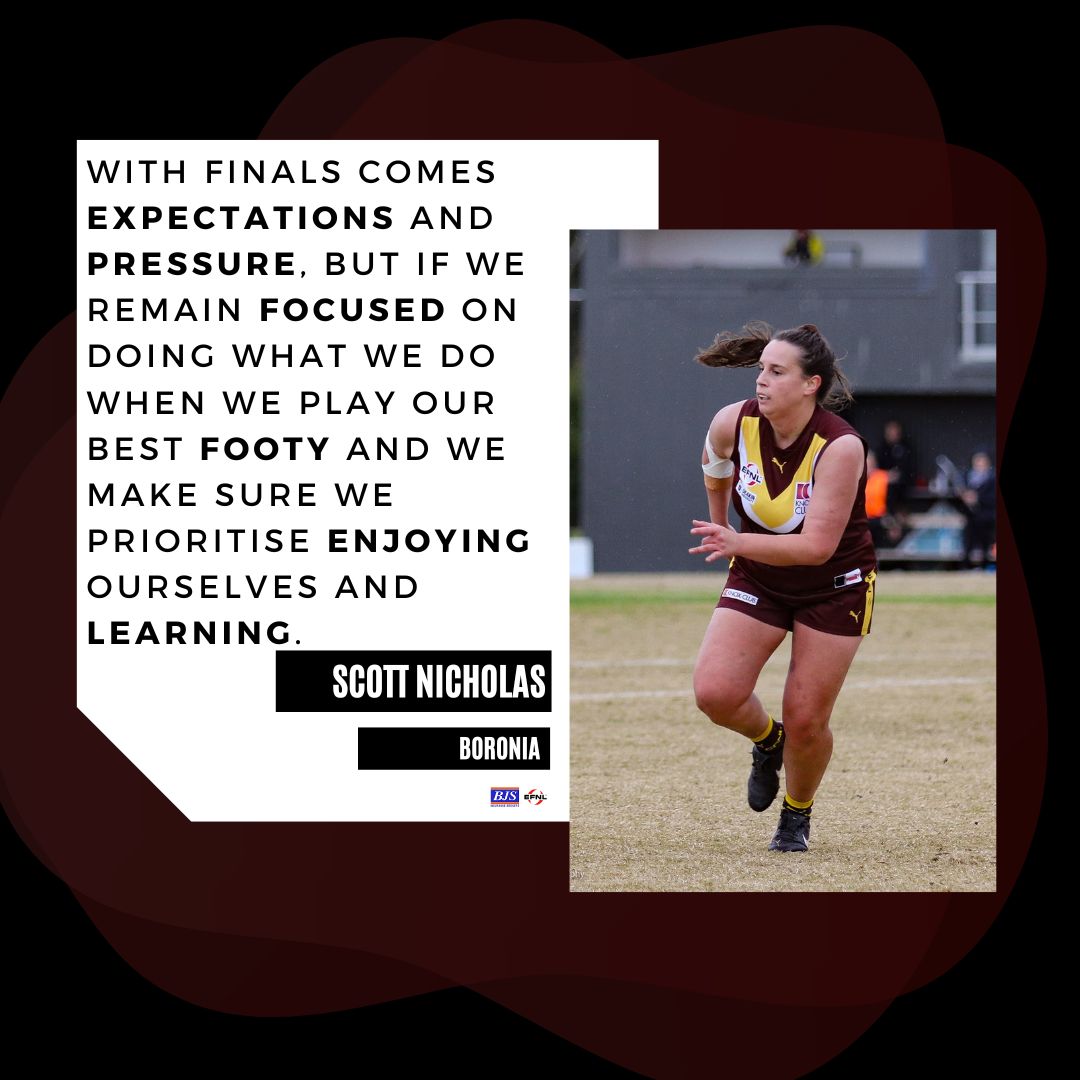 Boronia continue to grow in confidence week after week, despite a tough initiation to Premier (B) Division Women’s football.

After a slight rough patch over the past few weeks, last weekend the Hawks were able to knock off neighbours The Basin for a second time in 2022, this time on their home deck.

Boronia senior women’s coach Scott Nicholas recently said that the two victories over a Bears side they highly-respect have been two good wins, especially given the Hawks will likely come against the Bears in the first week of finals.

“We know they’re a quality outfit so whenever you’re playing a good team you really try and rise to the occasion,” Nicholas said.

“(We’ve had) two really good wins against The Basin this year which has been huge in building our confidence and the confidence of the playing group (is knowing) that we belong in this Premier Division.”

There were plenty of starring performances on the day, with Rachael Slater amongst the goals once more with two, whilst tough defender Ali Gottliebsen was named best on.

“On a tough day The Basin are a good team and get a lot of entries but it was defended well, and we got our matchups right.

“One of those critical matchups is Julia Baker, you know she’s always going to impact the game in one way or another, but we had our own Julia B play on her and she’s done a really great job on her a couple of times.”

They came into the game following a rough 124-point loss at the hands of the top side of Premier A in the Eastern Devils the previous weekend.

Whilst the score line didn’t flatter the Hawks, Nicholas said they took plenty of learnings out of the game.

“I think (the game) was important in us having confidence that when we are playing our best football, we can match it with anyone.

“We had a few disappointing results against Donvale two weeks in a row, but the really tough game against the incredible outfit that is Eastern Devils helped us refocus and concentrate on what we need to do to be playing our best footy.”

They’ve had a diverse range of coaches this year, with former leaders such as Amanda Cellante and Erin Stanios helping alongside the likes of development co-coach Candyce Wright plus senior assistant’s Brad Slater and Lachlan Watson.

Nicholas gave credit to his coaching panel for helping develop the team as well as players taking the step up to senior footy.

“That diverse group of coaches have really helped our squad continue to grow and make sure all the players have different avenues to seek support.

“We’re really proud of the group of coaches we’ve got, and I think that’s been really critical to the success we’re starting to see.”

There’ve been plenty of stars this year, including Slater, Gottliebsen, Meghan McKernan and Stephanie Phillips. Nicholas said that he’s proud of how far they’ve come

“Those four are four that are really invested in improving themselves and naturally that sets a bit of a tone for the playing group as well.

“Our senior captain Bree Watson as well, she’s one of those players that’ll do all the little things to improve herself and that sets a really great example for all of our players.”

Both the development and senior sides have supported and celebrated each other’s success throughout the campaign, including last weekend.

“We talked about it on Monday night as a coaching group (about how) that was one of the highlights of our season so far in that we could celebrate a great win.

“The other exciting milestone that happened on the weekend was that we had our first women’s player Darcy Langford play her 50th game for the club.

“That was exciting for us to come together after playing at separate venues and not only celebrate a win but celebrate that new part of the club’s history.”

The senior side is set to venture into a finals campaign in 10 days’ time, with Nicholas saying that the focus is that the girls continue to enjoy themselves playing.

“Yeah, we want to keep improving and developing, but it always comes back to you always playing your best football when you’re enjoying yourself.

“With finals comes expectations and pressure, but if we remain focused on doing what we do when we play our best footy and we make sure we prioritise enjoying ourselves and learning.

“That’s held us in pretty good shape the last five years and hopefully that’ll take us deep into this finals series.”