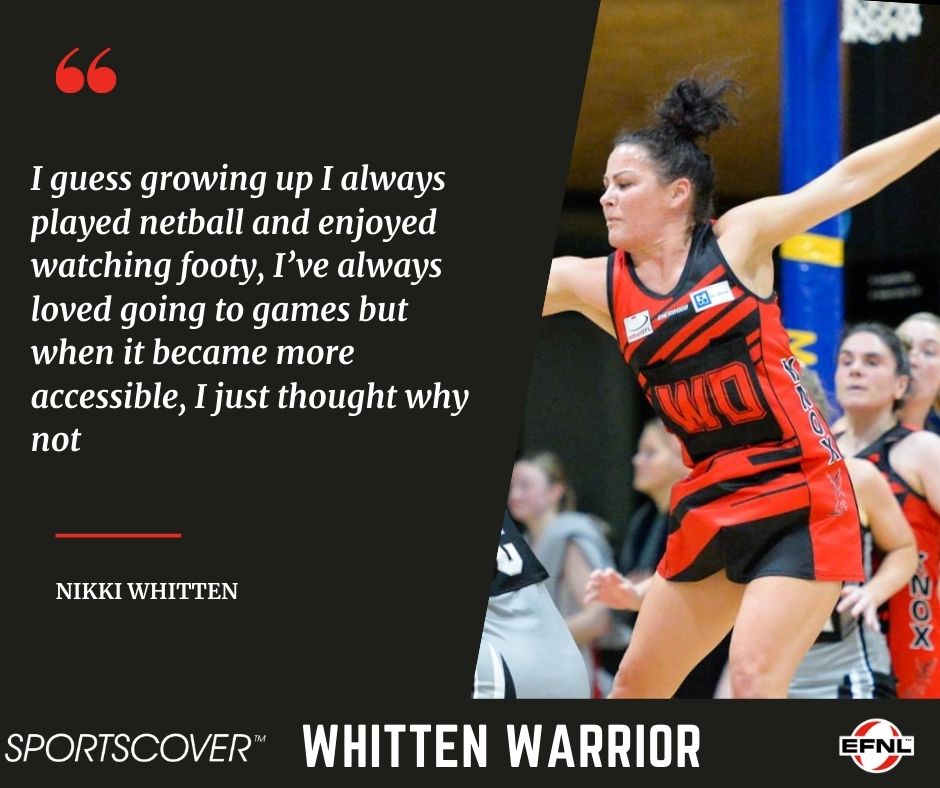 Nikki Whitten, 40, is a dual sport athlete of the EFNL, playing netball and football for the Knox Football Netball club – excelling in both – with no plans to stop in the near future.

Whitten has always been a passionate sportsperson, playing volleyball and netball as she was growing up and now, she, her husband and kids are all committed to playing for Knox each and every weekend.

Whitten is a gifted footballer who leads the Knox midfield each week in the Women’s Deakin Uni 2nd Division and has been in the best players for five of her eight games this season.

Football is the newer addition to Whitten’s sporting repertoire.

She began playing football in 2019 for Knox, something she always wanted to do, but never thought would happen.

“My brother plays for Knox and my husband plays there as well, so I’ve always been around the club. But the opportunity only came for me when the women’s team became affiliated with Knox and I just thought why not,” Whitten said.

“I guess growing up I always played netball and enjoyed watching footy, I’ve always loved going to games but when it became more accessible, I just thought why not.”

Whitten notes her first season of footy was often about finding her feet in the game with things like which position to play, but now she is just enjoying playing. She has found an appreciation and love for footy, enjoying the different aspects the game offers, compared to all the other sports she has experienced, such as netball and volleyball.

“It’s such a different feel footy to netball, I love them both, but it is something that just makes you want to play.

“It’s a longer game and a totally different skill set involved so there are definitely different friendships and a different bond in footy.”

Her Knox football side are now sitting fourth on the table she is feeling over the moon with how it’s going considering the team’s lack of preseason due to not having the number for a team initially.

On the netball side, her side sits in third on the ladder in Premier Division.

Whitten is reserving judgement on how her team will fair come the end of the season. However, she is keeping eyes on Boronia who are clearly setting the standard for the division.

Enjoying both sports is easy she says, however with a family who all play sports it can be tough to fit it all in.

“We don’t really have much spare time,”

“My husband plays and my three girls all play for Knox so it’s pretty much full every day of the week, but I’ve always been busy, and I enjoy it,”

“It is sometime hard backing up a Friday night game with 9am game of footy, that’s always a bit of struggle but we manage.” All this going on there is one constant, her club Knox, it has provided her not just with a place to play the sports she and her family love, but a community.

Growing up at the club watching her brothers and seeing their friends play and now having grown up with them still playing, Whitten has many proud memories at Knox Gardens..

“We just had our 40-year Gala on the weekend and just the memories going through the club like how far it’s come, changed and evolved”

“It is a real community and a community with a lot of people that are local,”

“Our netball team are all pretty much locals and I think that is part of it,”

“People have grown up in the area and you’re always welcome here”.