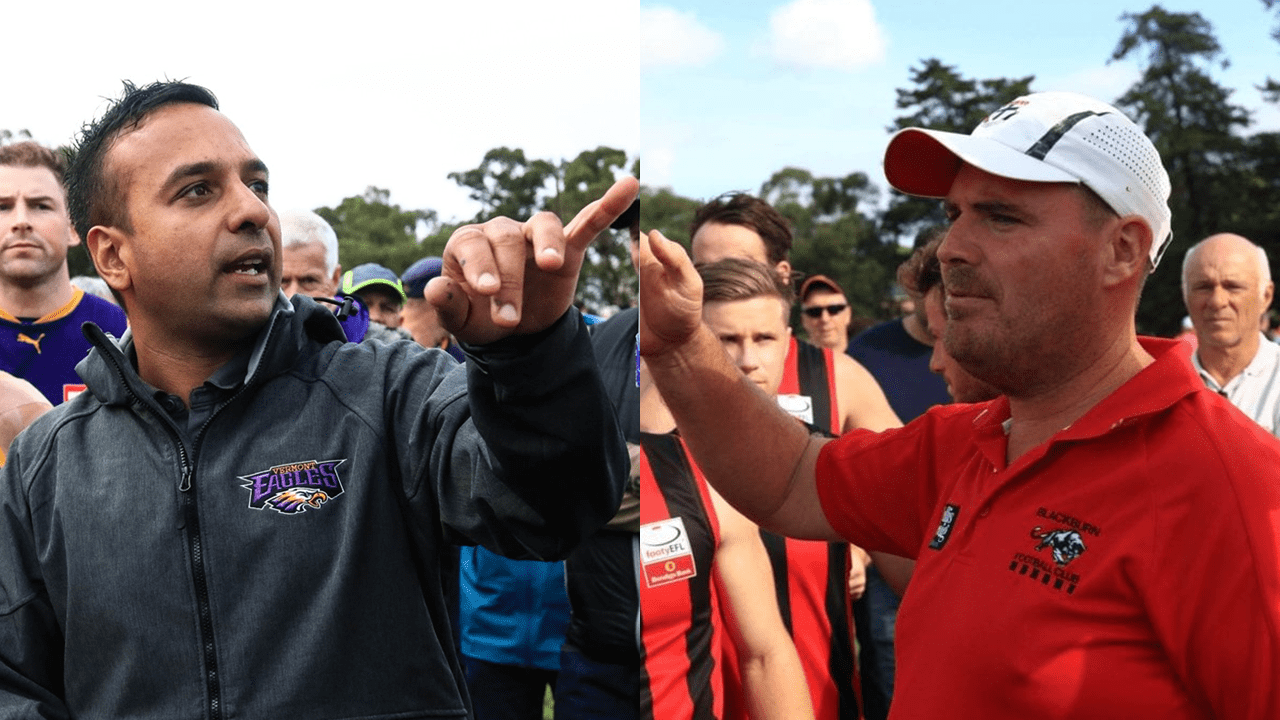 THE biggest game on the EFL calendar takes place on Saturday afternoon as Vermont and Blackburn match-up in the 2019 Eastland Premier Division Grand Final at Bayswater Oval.

For Vermont, after yet another minor premiership, it’s a chance to go back-to-back and win a 21st EFL premiership, whilst for Blackburn, it’s an opportunity to make history and win the club’s first-ever EFL top-tier flag. The Panthers come into this one in fine form after defeating Balwyn by five goals in last weekend’s preliminary final.

After losing to Balwyn in its first final only a fortnight prior to last weekend’s game, Blackburn managed to turn things around and run away victors behind four goals each from Jake Hammond and Julian Soccio.

Blackburn coach Brendan Allen said he was impressed with his side’s ability to respond a second time around against Balwyn and gain some momentum coming into the big dance.

“We didn’t show up (against Balwyn), it was our worst game of the year in our first final,” Allen said.

“That’s why you work so hard to get the double chance, so if you have that lapse or that slip-up, you’re still alive.

“It was a good kick in the pants for the group. We turned it around against South Croydon, and then obviously last week.

“Playing them (Balwyn) first time around obviously gave us good insight into what they do well and we were able to turn the result around on the back of that (in the preliminary final).”

After its preliminary final win, Blackburn’s focus immediately shifted to Vermont – the minor premier and the red-hot favourites in this weekend’s grand final.

Allen said he doesn’t want his players to focus too much on Vermont and instead focus on themselves and what they do best.

“They’ve (the Eagles) obviously been the best team in the home and away competition this year,” he said.

“If we get a good start and concentrate on what we do well, not getting caught up in trying to stifle what they do well, hopefully that holds us in good stead.”

The Panthers will be playing their fourth final this series whilst for the Eagles, it will only be their second after two byes.

The two coaches had different opinions regarding the benefits of continuity opposed to extra weeks off.

Allen said for his younger side, continuity is important in gaining and maintaining momentum throughout a long finals series.

“We’ve got a lot of players that just enjoy the continuity of playing week in, week out,” Allen said.

Meanwhile, Vermont coach Harmit Singh said his side needed the extra weeks to fight through some niggles and get back to full fitness.

“It’s (the bye) allowed us to get a couple of players back who weren’t quite right to play against Balwyn a fortnight ago,” Singh said.

“We were in the same boat last year – and we had a pretty good start in that grand final.

“There are some pros and cons to both sides; I think it’s really more about the mindset of how you attack a grand final.”

As Vermont approaches yet another decider, Singh said he is confident his side won’t get complacent and can handle the expectation that comes with being the favourite.

“The group is well-aware (of expectation) and there is no entitlement,” Singh said.

“No-one 10 years from now will remember who finished minor premiers in 2019.

“The best side doesn’t always perform as well in a grand final; success is all around your mindset and coming ready to execute the way you want with pressure around you.”