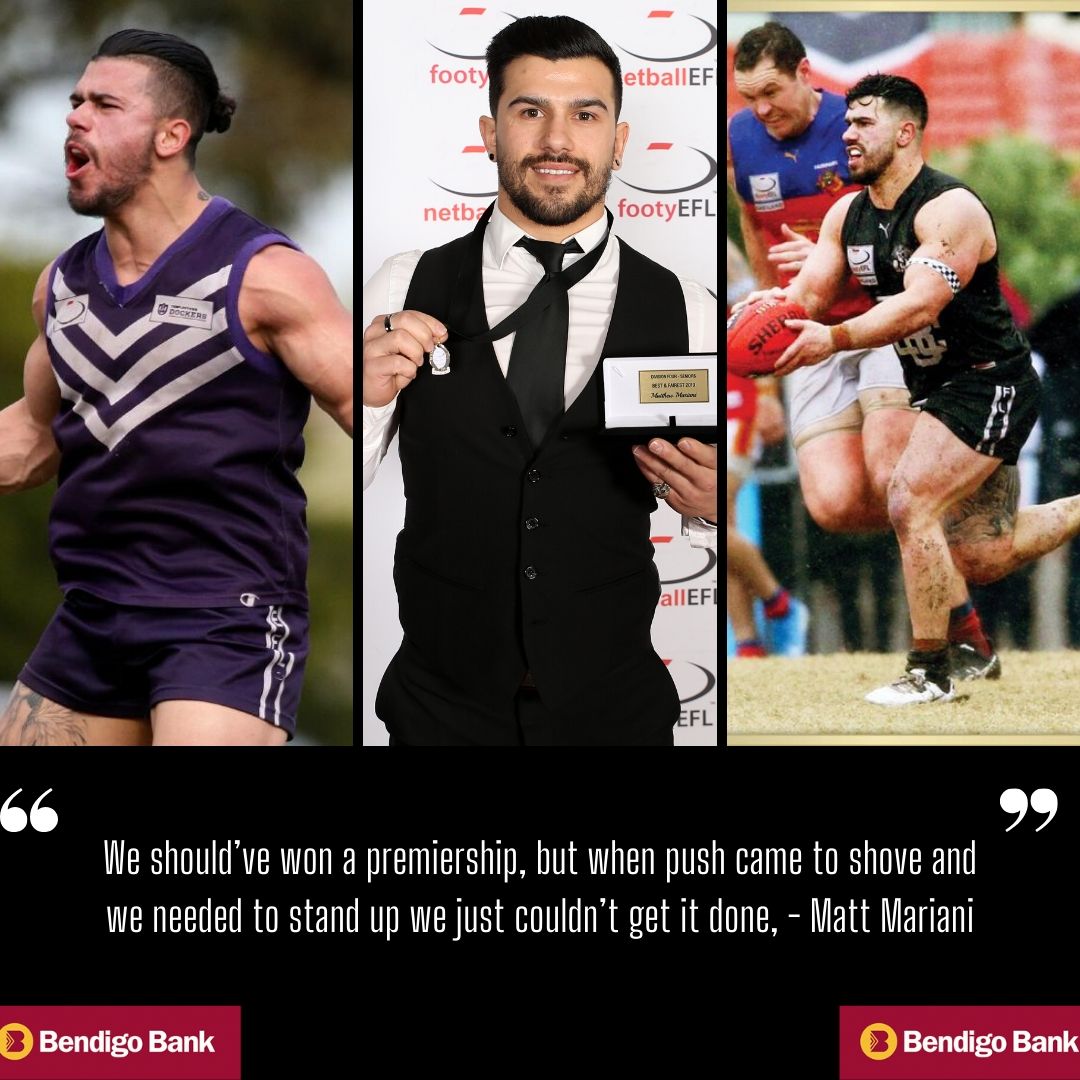 Last season’s Chandler Medal Night was a special one for EFNL journeyman Matthew Mariani, as he became the latest player to gain League Legend status after he polled 28 votes to win the inaugural Stephen Jones medal and his third league medal.

But while personal accolades are nice, the 27-year-old’s main focus is helping his East Burwood Rams back up to the top tier of the EFNL, a place they haven’t been since 2013.

He spent the bulk of his junior football playing at Bennettswood and Surrey Park before finally joining his brother at East Burwood for his Under 16 year.

This was followed by two seasons with NAB League (then TAC Cup) side Oakleigh Chargers, where Mariani made eight appearances over two seasons, with compartment syndrome negating his time with the Chargers.

The midfield bull has no regrets surrounding his time at Oakleigh, with most of his setbacks completely out of his control.

“I wouldn’t say I have any regrets because I had compartment syndrome at the time, which affected my top age year,”

“I went to the draft camp, but I had to pull out of some of the testing because it was constantly flaring up on me.”

Left undrafted, Mariani headed down to Port Melbourne to try his luck at VFL level before eventually returning to East Burwood to focus on the Rams EFL Division One season.

Mariani had already debuted for the Rams senior side in 2009 – aged just 16 – in a loss to Scoresby, who were building towards one of their strongest eras of football. The Rams would go on to finish 10th that season, a ladder position they were not yet used to.

Like many, memories of his first game are cloudy and unclear, but Mariani can remember one thing from his debut.

“I remember getting into a bit of scuffle at half time, but other than that I can only really recall bits and pieces of my first game,”

“I was a bit smaller than everyone else, but I had a crack.”

Nine senior games followed the next season, as the Rams steadied in the EFNL’s top flight finishing eighth on the ladder. 2011 marked his first full season in the senior side as East Burwood threatened the finals but fell just short, finishing sixth.

In 2012 they finished sixth again, but their ladder position was just papering over the cracks.

The club fell off a cliff the following year, finishing dead last to kickstart a free-fall drop off which saw the former league powerhouse slip into the bottom division by 2018.

According to Mariani, who played the full 18 games in 2013, the players had lost faith in both themselves and the club by the end of the 2013 season, a stark contrast to when the club was at its peak.

“I was always around East Burwood watching my brother (as a junior) and that environment was so good when they club was at its peak, especially when the Stephen Henshaw’s and Marcus Carroll’s were running around,”

“It was an unbelievable atmosphere to be around at the time, I used to run water for the senior side when I could, do the boundary for the reserves and so on to stay involved.”

“But by the end (2013) things had just got to a point where people weren’t enjoying their football anymore,”

“We had the talent there, but it just got to a point where the players lost faith in the club and ourselves and it unravelled from there.”

Now was the time for a move.

Both Mariani boys were lured to Templestowe via a relationship with a Dockers committee member and an impressive approach by the men in purple.

Mariani during his time at Templestowe

The change in scenery bought the best out of Matthew, with the forward thinking centreman leading the Dockers charge across the next few years, winning two league medals along the way in 2014 and 2016.

Whilst Mariani knew he’d had good seasons in both medal winning years he never arrived at the League’s night of nights expecting to exit with an extra piece of jewellery.

“I hit my straps at Templestowe, I was moving well, and I stayed injury free,”

“You know when you’ve had a good year, but at the same time there is so many good players in the competition, so you can never head into a night thinking you’re going to win,’

“I just rolled up, sat down and away we went.”

“It’s not about the medals though, for me and everyone else I assume, it’s about winning premierships and unfortunately we couldn’t do that at Templestowe.”

Not for a lack of trying though.

The Dockers made the finals in all four years that Mariani spent at the club, including two Grand Finals (2014 and 2016) and a Preliminary final (2015).

In 2014 the Dockers led Wantirna South by 26 points at the final change, before the Devils kicked 6.0 to 0.2 in the last to run out eight point winners.

The Dockers kept their opponents scoreless in the last quarter and had nine scoring shots, but could only convert one, kicking 1.8 to finish up seven point losers.

In 2016 it was another foe, but this time they weren’t even at the races as a rampant Upper Ferntree Gully completed a perfect season.

2014’s loss played a major role in holding the Dockers back in the proceeding years according to Mariani, who left the club after the 2017 season when the Dockers were knocked out in straight sets.

“We should’ve won it (2014), we just ran out of legs, and it was heartbreaking at the time, especially for the guys who had been at the club for so long,”

“There were so many talented footballers in that Templestowe side and we should’ve won a premiership, but when push came to shove and we needed to stand up we just couldn’t get it done,”

“It gets harder each time you get there as well because those memories (of previous losses) are playing on your mind, as much as you try and push them away.”

2018 and it was another new home for Matt Mariani as the league’s answer to Dion Prestia joined the Whitehorse Pioneers.

This time the connection came through Mariani’s accountant and the change of scenery did the trick. Mariani featured 13 times for the Pioneers as they fought their way to an unlikely premiership.

The Pioneers failed to kick a goal in the first half of the Grand Final on a blustery day at Mitcham’s Walker Park. Their opponents, the Glen Waverley Hawks hadn’t put away the Pioneers, despite their dominance, with just 17 points the difference at the half time break.

And whilst many may have begun to give up hope, Mariani says the atmosphere in the Pioneers rooms was one of belief.

“Once we got that first goal the momentum just took over – it was ridiculous – we took every opportunity that came our way.”

The Pioneers roared into life in the second half, hammering the Hawks from pillar to post to complete a 33 point turnaround and win 6.12(48) to 4.8(32).

Whitehorse Pioneers completed an impressive come from behind premiership win in 2018.

With a premiership finally under his belt the time seemed right for Mariani to return to the Rams who were showing signs of coming out of their trance, having made the Division Four Preliminary final in 2018.

The appeal of being part of the rebuild was something he couldn’t turn down.

“I’ve always had a soft spot for the club and a good vibe was starting to return,”

“It started to appeal to us (he and his brother Anthony) as a chance to help get the club back to where it once was, back to that unbelievable atmosphere that it used to have.”

The first step in returning East Burwood to the promised land was completed last season, with the Rams gaining promotion despite going down to Fairpark in the decider.

And whilst the top flight is still a long way away, Mariani believes the club is on the right path.

“I think we can get back there and yes it’s still a long way away, but I think we’re on the right track both on and off field,”

“The vibe is there, everything is starting to flow and the playing group we’ve got is a young group, a really young group that can grow together and push for a return to the top.”