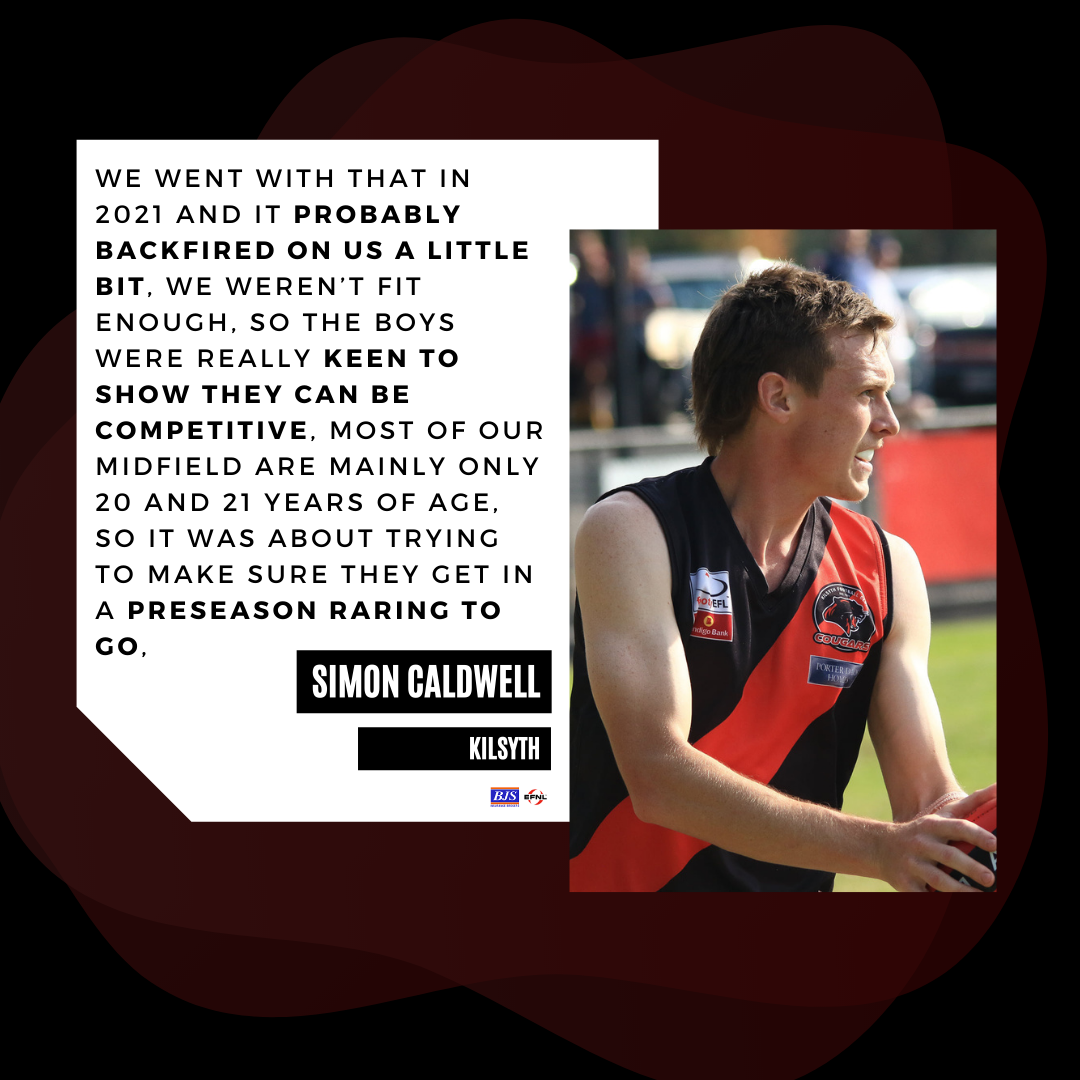 Kilsyth entered the 2022 season as one of the more intriguing teams across the Eastern Football Netball League.

After a reasonably disappointing 2021 campaign that yielded just three wins from their 11 matches in division four, the Cougars were keen to turn things around. It has been a lengthy finals drought for Kilsyth and after two consecutive losses to start the year, the top-four couldn’t have looked further out of reach.

But they found a way to flick the switch, with back-to back wins in rounds three and four firmly firming their legitimacy as a final’s contender in 2022.

Their most recent win was a hard fought 14-point victory over Croydon North MLOC, holding on late after leading by just nine-points at three-quarter-time.

Kilsyth’s coach, Simon Caldwell, was full of praise for his team’s improvement so far this season.

“Compared to what other sides have done, we haven’t gone out and recruited a lot of guys.

“We’re still sticking with the young ones that we have, so there’s been a hell of a lot of improvement I think with the group from last year.”

Caldwell picked out a couple of key areas after the opening two weeks but wasn’t disappointed with his team’s efforts.

“Going back to the first couple of weeks, we probably weren’t too disappointed with how we went.

“We focused on locating the opposition coming out of our forward line, they were getting too much fast play on us the first couple of weeks, we were just too slow to locate players,

“That’s probably the main area we’ve been working on.”

After jumping out of the blocks early against Croydon North, the Cougars found themselves holding a slender nine-point lead heading into the final term.

They were able to grind out a tough win, kicking two goals to just one for the KangaRams in the final term.

Caldwell spoke on the message to his troops at the final break.

“We focused on re-structuring a bit, they got a couple behind the footy well, we didn’t let them have that,

“We were winning in the ruck and from the source, winning more clearances and we were on top there,

“We just wasted some opportunities going forward and they were rebounding too quickly, so just trying to fix that up a little and not giving them that spare behind the footy.”

Kilsyth have also benefited from the incredible start to the season by their main forward, Ryan Goodinson. After kicking 17 goals from his past three games, Goodinson has booted the most goals of any player in the division.

“He’s another one who’s done all the preseason, I don’t think he’s ever done a preseason in his life. So, he’s a lot fitter and able to get up the ground, when we have the other players around him to be able to do it.”

After another extended off-season following a Covid interrupted 2021 season, Kilsyth identified the areas they needed to improve on to be more competitive this year.

Caldwell said that fitness was a huge focus area for the playing group, with some choosing to start their pre-season early.

“We started back pre-season like a lot of clubs, sort of mid-November, but we had 10 or 12 players who started doing their running program two nights a week from the start of October, so they had an extra eight weeks before we got back.

“So, they were coming back and hitting preseason already raring to go.”

“The year before, coming off the 2020 year with Covid we sort of had a bit of plan that we thought might work for us, making training just one night a week,

“We went with that in 2021 and it probably backfired on us a little bit, we weren’t fit enough, so the boys were really keen to show they can be competitive, most of our midfield are mainly only 20 and 21 years of age, so it was about trying to make sure they get in a preseason raring to go,

“Then we did all of our structure stuff as much as we can after Christmas, because we already had that big base of three months extra running in us.”