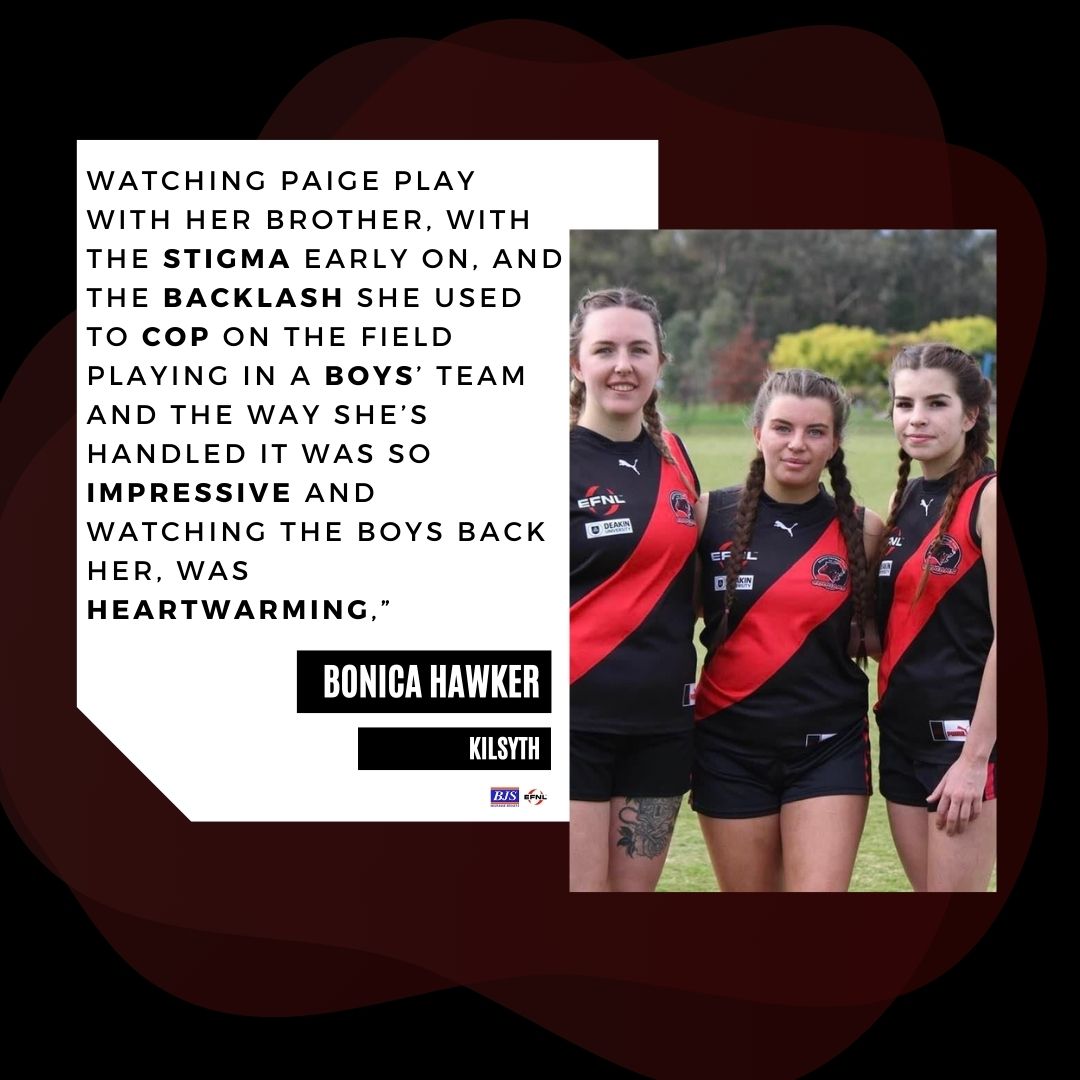 Kilsyth can stake a genuine claim as the ultimate EFNL Family Club, with five sets of siblings all running out together week in, week out for their Senior Women’s side.

For Kilsyth’s Bonica Hawker, the mother of sibling’s trio Paige, Ebony, Amber, and secretary of the Cougars, it’s a very proud moment as both a mum and a Cougar.

“Watching the three girls play together now in seniors, is quite good as a mum to watch,” said Hawker. It was the brother of Paige, Ebony and Amber, Brodie who proved the catalyst for the girl’s participation in football.

The Hawker family has been involved with the club since Brodie first stepped out the doors for Auskick.

“Paige [Hawker] started in our junior’s team in under 12’s in 2018 and has stepped up to seniors to play with her other two siblings,

“Their brother [Brodie] has played at Kilsyth since Auskick which has enabled the girls to step into the football environment,

“Paige would play her first game with the girls, and then she would go straight across over to the boy’s team, she was permitted to do that for two or so seasons.”

Sisters Tiarna and Courtney Jackson have also enjoyed their time at Kilsyth and have quickly developed their talents as footballers.

Tiarna highlights the importance of creating new relationships through the social side of football and the enjoyment of playing alongside with her sister Courtney.

“I’ve played footy on and off for about six years, I grew up watching it and I guess that’s what made me want to start playing back in 2017,

“My sister Courtney got me down to Kilsyth last year and from there the girls got me to start playing,

“It has been the most rewarding experience on and off the field between the fitness and the friendships that you form along the way,

“Being able to play alongside my sister is awesome because it just creates good vibes and a positive build up to all the games.” The stigma of Women’s Football in the initial stages was a major concern and ultimately could’ve impacted the future of the sport, but luckily for Paige Hawker, her brother always had her back during the early stages of her career, as her mother explains.

“Watching Paige play with her brother, with the stigma early on, and the backlash she used to cop on the field playing in a boys’ team and the way she’s handled it was so impressive and watching the boys back her, was heartwarming,

“You see when the girls started, they may play one or two seasons, and then sort of wander off and the whole women’s football team idea starts to die off, but to actually see three groups come through juniors then into seniors was really pleasing to see.”

Paige highlighted her path through the junior ranks to the seniors, and the ability to enjoy each game with family, standing by the club’s motto.

“My football career started in 2018 in the first junior girls’ team for Kilsyth in under 12’s.

“I also got the opportunity to play alongside my brother for a couple of seasons after my game each week and now to be able to play with my other two siblings is a great feeling,

“Our grandparents come and watch us each week and mum is involved in the club.

Amber Hawker, another part of the Hawker sibling trio was encouraged by her dad to play football and is now loving each game more and more, after having been around the club for over 10 years.

“This is my second season of playing football and I have been involved with the club alongside all my siblings and cousins who also play for 10 years now since my brother started Auskick in 2012.

“My dad started talking me into to football games when I was very young, so the passion grew on my very early.

“I love playing alongside my sisters Ebony and Paige because it makes us closer having something to bond over.”

“Kilsyth is quite a family orientated club which is really good, seeing all the girls play together, enjoying themselves and getting better with each game is awesome.”