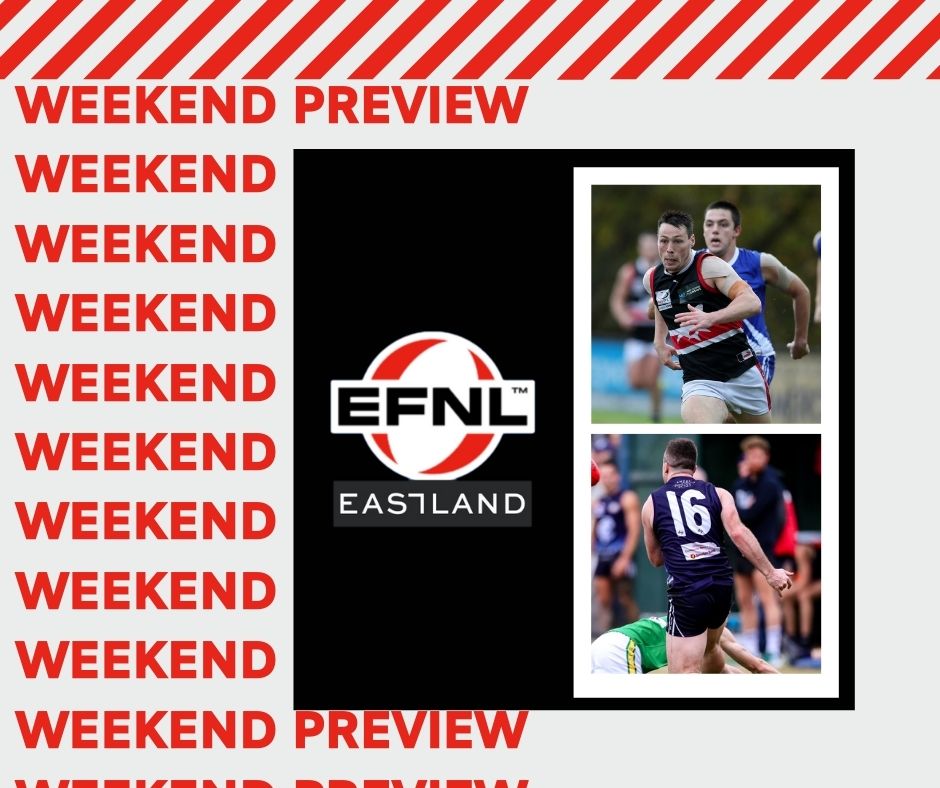 Into the second month we go.

Will North Ringwood grab their first win of 2021?

Can The Basin keep this unbeaten streak going?

Will Nunawading grab a victory or will Kilsyth go 2-1?

All this and more in the Weekend Preview.

Will the Saints get on the winners list this weekend? Photo – Field of View

Coming off a tough loss to their local rivals and a bye, North Ringwood head into this weekends game with Doncaster East under a little bit of pressure, as they look to inject some momentum into their year and get off the mark.

Their loss to Norwood actually wasn’t as bad as the scoreboard suggests.

The Saints won the contested disposals by 68 against the Wooders, had nine more clearances, three more inside 50’s (59) and managed to hold a strong level of pressure throughout the game with 51 pressure acts and 62 tackles, helping create turnovers – of which they garnered 50% of their score.

Playing coach Robin Nahas (36 disposals) and club stalwarts Aaron Fenton (33 disposals) and Jack Whelan (28 disposals) were strong performers in round one, along with Gary Conyers who had over 20 touches and kicked three majors.

They’re coming up against a thus far impressive Doncaster East side who got their first win in the Premier Division last weekend against local rival Doncaster.

The Lions were in control all day and this was highlighted by their dominance in either arc, with Simon White and Sam Rowe the headline acts.

The Lions play a direct style – ranked just eighth for disposals – and are strong in the air.

Both sides will want to tighten up their kicking efficiency though. The Saints conceded 65 turnovers in round one, which turned in 9.5(59) for Norwood, whilst the Lions are averaging 57 per game – kicking at 51% in 2021 – but have been lucky to shift just seven goals from the 114 turnovers they’ve conceded this year.

Tomorrow will be the Lions first away trip in 2021, and I suspect the bigger ground will shine a brighter light on their low kicking efficiency.

The winner will be the better side by foot and I’ve got a feeling it’ll be the Saints, who will be aided by the Lions omission of Sam Rowe who will miss due to hamstring tweak.

Croydon are building nicely into season 2021. Photo – Field of View

Park Orchards will enter their matchup against Croydon full of confidence, as they sit second on the ladder as one of the three remaining undefeated teams in their division.

Campbell Cromb has been in the Sharks’ best every week, and they’ll be needing every bit of that form against a Croydon side that is building slowly into season 2021 after a strong pre-season following.

The Sharks will no doubt have been working on their goal kicking in recent weeks, as they search for more accurate scoreline. So far it’s yet to hurt them, but it’s a risk they wont want to keep taking.

Five goals from Riley Constantino proved to be difference last week as the Blues overcame a tough – albeit winless – Bayswater side to go 2-1 in season 2021. Constantino now has nine goals in the last two weeks, and the Croydon faithful will be wanting to see more from the key forward against one of the inform sides of the competition.

This would’ve been the likely grand final match up if you surveyed the public during the pre-season and with it being played at Stintons Reserve, home ground advantage goes out the window. That being said, the Sharks are humming at the moment and should go 4-0, especially if they find the big sticks more often.

Lilydale come up against Upper Ferntree Gully in a matchup that will likely produce a high intensity clash like no other this season as both teams will be striving to attain their first four points of the season.

The Falcons will be heading into the match at Lilydale Sports Oval with a sense of urgency after a thirteen point defeat against Montrose last weekend, with a last quarter fade out to blame.

Remarkable solo efforts from Beau Mitchener and Jordan Jaworski were crucial last weekend and the pair will be key to the falcons chances tomorrow.

The Kings stand in the way of the Falcons achieving their first win, as the Kings are just as famished and hungry to start producing some winning football in a manner reflecting triumph.

The Kings’ produced their best performance of the season to date in their nine-point loss against Mitcham and will go into the weekend’s game with rising levels of confidence.

Form lines are hard to read with both sides putting their best performance of the year out last week, but the Falcons might have the goods at home.

The Basin maintained their faultless 2021 last weekend in eclectic conditions against Knox, finding their kicking boots in the second half to overcome a persistent Knox outfit.

Nicholas Hallo has received the most plaudits in 2021, but teammates Ethan Power and Jackson Drake have been equally as impressive this year and all three of them appeared in the Bears best players.

The Bears are the number one ranked attack in 2021, with 253 points for this year, and they’ve had four players with four goals or more this year. They’re doing well at the other end of the ground as well, ranked number two behind Boronia, but just one point.

Their opponents – South Belgrave – will be rueing a second half fade out, which handed them their first loss in almost 1000 days, as the Saints suffered a one goal to five second half to turn a 16 point halftime lead into a nine point loss.

A very uncharacteristic goalless third term was a major cause of this fadeout, with the Saints having just five scoring shots to the Hawks 10 in the second half. They’ll be without their number one goal kicker this week as well, with Tim Smith omitted, taking his 11 goals in three games with him.

Momentum is a funny thing in sport and the Bears will have this plus home ground advantage on their side heading into this one, but on paper the Saints still look very strong.

It’s going to be a tight one, but the Saints will start another winning streak in my – very humble – opinion.

Fin Brown kicks one of his 3 majors last week. Photo – Field of View

To the other undefeated Division Two side, Boronia.

The Hawks claimed the come from behind off the back of their defensive masterclass in the second half (see The Basin v South Belgrave) and are being led well by new skipper Harry Burgess.

Burgess has appeared in the best players each week this season as Boronia have kept a tight stranglehold on opposition defences, conceding just 38 scoring shots this season (rd 1 4.6(30), rd 2 3.9(27) rd 3 7.9(51))  and carrying on the Matt Clark mantra.

This won’t be music to the ears of Heathmont fans, who are smiling from ear to ear after their surprise Parker Cup victory.

The Jets have struggled to kick a winning score thus far this year, with totals of 35, 64 and 68 in the first three rounds. They’re being led by Fin Brown and Jed Hansen who both have five majors for the season, Brown a standout last Friday Night.

That leaves two options for Rutley’s crew, either create a high pressure, low scoring tussle which will keep the scores close or they can attempt to unlock the Hawks system and bring them out of their very good shell.

The Jets are improving each week as they get used to what Rutley needs from them, but Boronia have been the benchmark this season.

The Hawks win at home.

It’s been a rough start to their first season in Division Three for FairPark, as they’ve started the season 0-3 and languish in very last place.

Luke Walker was the Lions’ best player in their 22-point loss against Scoresby, and his side will be hoping for every bit of that form against Glen Waverley who has also had a slow, albeit intriguing, start to the season.

Glen Waverley played to a standstill in Round one splitting the points with Scoresby after the final siren signalled a 64-64 draw. The Hawks simply couldn’t find momentum in Round three coming off the bye, as they ended up going down by 15 points in spite of a best on ground performance from Scott McInerney which included a goal.

A big game for both sides, with the Hawks needing four points to get themselves moving towards the top four, whilst the Lions need reward for effort.

The Pioneers take on the wobbly Blues at home where both sides will be after four vital points as only percentage splits the two on the ladder.

The Pioneers are coming off of a forty-point loss to Warrandyte and will want to recover from the disappointing loss by ensuring the defensive structure of the side is durable and maintainable against the aggressive Blues.

The Blues themselves will be looking to bounce back after a significant loss to Ferntree Gully, where the fifty-nine point margin represented the inconsistency of the Blues thus far this season.

A dominant performance from Matt Perry last week against Ferntree Gully, booting three goals and being named amongst the sides’ best on ground must continue in order for the Blues’ to play finals and guarantee the substantial percentage of 134.84 is not wasted.

Expect it to be a close one, however, the Blues’ attacking game style might just get them over the line.

The Panthers clash with the Zebras is shaping up for a blockbuster with both sides thrashing their opponents in Round Two and will head into the match at Kimberley Reserve with an increased assurance and confidence.

The Panthers were impressive against the KangaRams, breaking a very long losing streak to get on the board in season 2021 against their new local rivals.

A dominant first half by Chirnside Park leading the Rams eighty six to eight at half time was the best of it, as they took their foot off the gas later in the game.

Five goals from Ben Slattery and the effective use of the footy by Jarrad Urquhart led to a ruthless attacking style of footy, which the Zebras must be weary of, as the structure and organisation of a solid defence is a must to ensure the contest is competitive.

The Zebras also had quite a considerable victory against Nunawading with the final margin being 160 points the difference.

The Zebras are in a good position to assert a level of attack through sturdy goal kickers such as Mitchell Hanegraaf who kicked nine and coach Justin Scicluna who booted four as well.

This one is going to be a contest where the goal umpire will be in need of a break, as the attacking game style of both sides will be at an intense level with the Zebras as favourites to get their second win of the season.

Both of this teams come into Round three off the back of receiving an absolute drubbing, with a combined defeat margin for the two teams of 287 points.

Clearly, there are very few positives to take from the previous weekend of footy for these sides, however, Nunawading may draw inspiration from this being a good opportunity for them to find their first victory of the season as they face an equally downtrodden Cougars side.

For the Cougars part, they have managed to notch up a win this season, a 104-point demolition of Croydon North MLOC at that, and should well and truly go into this game the clear-cut favourites to take home the four points, despite the sides splitting their fixtures back in 2019.

The Lions will need this win to get some good vibes down at Koonung, whilst Kilsyth will want to get back on the winners list – Cougars for mine.