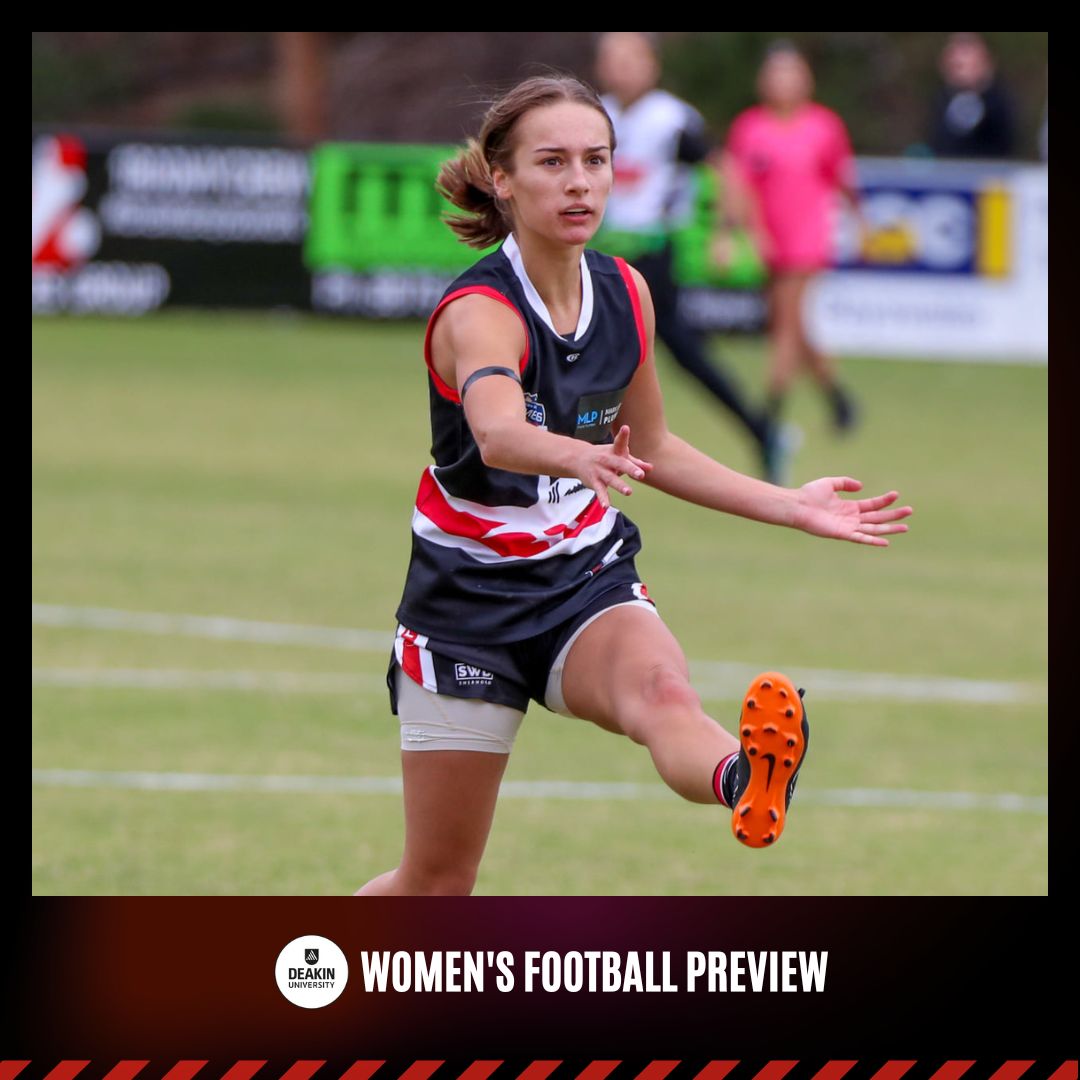 Round Four of the Eastern Football Netball League Women’s competition is on this weekend and what better time to read Tash Gunawardana’s Weekend Preview than now.

South Croydon: “The results from the past couple of weeks indicate the Premier competition is very evenly matched,” South Croydon Coach Simon Hammersley said. “I think we’ve prepared well with the bye week and won’t be taking SBL lightly up the hill on their home deck. We’re expecting another great game of footy against quality opposition and hoping to return with the points.”

Vermont vs Whitehorse: Vermont hosts Whitehorse at Vermont Recreation Reserve, in what is the crossover Premier and Premier B match. Both teams are evenly matched with two wins apiece, so expect a high-quality contest between the third placed (Premier) Vermont and Premier B ladder leaders Whitehorse. Vermont’s defence will need to stop the influence of Whitehorse forward Isabella Gietzmann who has five goals for the year already.

Vermont: “We’re expecting a good contest from Whitehorse,” Coach Tim DaSilveria said. “They played off in a Prem GF 3-4 years ago so we will make sure we’ve come to play.”

Eastern Devils: “We have had a good couple of weeks on the track after our last game and look forward to playing fellow newcomers Mt Evelyn,” Coach Jason Cridland said. “We will be looking for a consistent four quarter performance.”

Donvale vs The Basin: It is the second and third place match up between Donvale and The Basin at Donvale Reserve. Donvale has the leading goal scorer on their team including Jasmine D’Amato who has kicked eight goals this season.

Donvale: “Back at home this week, we have a strong focus on bringing the effort early,” Coach Stephen Latino said. “Boronia came ready, and we were not prepared. However, I was proud of the group to fight back and get the win. Now we must bring our best against The Basin and starting well is at the forefront of our plan. Keen for a big game.”

The Basin: “Looking forward to playing Donvale this weekend, a team we have never played before,” Julia Baker continued. “Our focus is high energy and fun. We’ve taken the pressure off ourselves and are just looking to continue enjoying our footy and playing together.”

Ferntree Gully vs Boronia: Ferntree Gully will be in search of their first win this season, when they host Boronia at Wally Tew Reserve. If Boronia win, it will be their second win of the season and with the ladder so close they could go equal first if other results go their way. For Ferntree Gully, Georgie Pruden is a player to look out for in the forward half as she has scored three goals so far and for Boronia watch out for forward Rachael Slater who has also kicked three goals this season. This match has the potential of being high scoring as both teams have scoring avenues with Pruden (Ferntree Gully), Slater (Boronia), Amanda Davidson (Boronia) and Meaghan McKernan (Boronia) and Rebecca Lia (Ferntree Gully).

Ferntree Gully: “Our girls are excited to play our friendly local rivals in Boronia this week for the ‘Love Me Love You’ cup,” Coach Tim Cavanagh continued. “We’ll have a different looking side this week with injuries/availability but we’re still very confident with the sides we’ll go in with. We always have tough contests when we play Boronia and know that finishing in front of goal will be the key to victory.”

Park Orchards vs North Ringwood: North Ringwood play against Park Orchards at Domeney Reserve. Park Orchards and North Ringwood are currently second and third on the ladder respectively and both teams have one win on the board. Both teams are hoping that they can secure their second wins especially because ladder leaders Rowville are undefeated on three wins. We still do not know which team is the second-best Division 1 Women’s team as every other team in the Division has one win except for the winless last placed Blackburn.

North Ringwood: “This week we play the early game versus Park Orchards at Donnelly Reserve,” Coach Jules Hanson said. “We love playing Park Orchards because it’s always a very competitive game. Our results over recent years shows two very evenly matched teams. We bring in some reasonable form with a win last round, but we are very aware that we need to bring our best game against Park Orchards who we respect a lot. We are all looking forward to another strong contest.”

Ringwood vs Beaconsfield: Ringwood hosts Beaconsfield at Jubilee Park. Beaconsfield has the Division 1 leading goal kicker in their team including Georgia Malkoun with eight goals. Ringwood’s defence will need to try and put a halt to Malkoun’s scoring impact otherwise Beaconsfield will record an easy victory.

Beaconsfield: “After a tough week last week vs Rowville, the ladies will look to regroup this week,” Coach Troy Robinson said. “With a number of injuries, it’s a great opportunity for our ladies to learn more roles within the team and keep developing their skills.”

Rowville vs Blackburn: The undefeated Rowville will play their second home match at Seebeck Oval against Blackburn. Rowville are yet to put a foot wrong this season as in the opening three rounds they won convincingly over their oppositions including North Ringwood 62-point win, Ringwood 27 points, and Beaconsfield 93-point win.

Rowville: “The message last week was that we wanted to play like footballers, not just those who can kick a football and we certainly did that.

“Looking forward to a good tussle with a seasoned Blackburn outfit.”

Blackburn: “We’re looking forward to the Round 4 clash,” Coach Jules Hay said. “We been working hard, setting team goals each week and the improvement in our young group is commendable each week.”

East Ringwood vs Kilsyth: East Ringwood hosts Kilsyth at East Ringwood Reserve. Both teams sit on one victory each and will be looking to get their second win on the board and move into equal second with Surrey Park. Kilsyth’s backs will need to make sure they stop the forward impact of Hayley Thompson. If Kilsyth halt East Ringwood’s scoring than this will be one of the keys to help them get that win over the weekend in enemy territory.

East Ringwood: “In the first three rounds we’ve experienced everything footy has to offer,” East Ringwood Coach Adrian Fittolani said. “A win, a draw, and a loss! We’re learning every week and look forward to putting that learning to work this week against Kilsyth.”

Kilsyth: “Should be an interesting game coming off our loss to Knox. We are looking at areas to improve our game, especially around the stoppages. We need girls to raise their game if we are going to knock off East Ringwood.”

Knox vs Heathmont: The top of the table Knox plays the fourth placed Heathmont at Knox Gardens Reserve. It will be a tough assignment for Heathmont to be the first team this season to knock off Knox on Knox’s home ground.

Knox: “I was impressed with how the girls played against Kilsyth with everyone doing their part,” Coach PJ Jordan continued. “The only downside was our inaccurate kicking for goal which we will work on during this week. Sarah Plumridge, Tamara Stocks and Nikki Whitten had strong games. We’re at home this week and it’s important we make it difficult for any opposition to beat us at our ground.”

Surrey Park vs Montrose: Montrose and Surrey Park will play each other at Surrey Park Reserve. Depending on the other results in the Division, Surrey Park could go equal top with Knox.

Montrose: “This weekend we have Surrey Park who have had a great start to the season – a very big challenge with them and Knox being the standouts this year,” Montrose Coach Shilette Baker said. “Improvements to be made in our structure, but we are giving ourselves every chance with our forward entries which we want to capitalise on this round.”

Mooroolbark: “With so many positives coming out of last week’s game it’s hard not to get excited about what this group can accomplish this season,” Coach Domenic Ciancio said. “With numbers increasing and the enthusiasm this group portrays we will build on this momentum. Looking forward to this week’s challenge.”

Mitcham vs Nunawading: Nunawading travels to Mitcham to play at Walker Park. Mitcham and Nunawading are both currently fifth and sixth on the ladder with one each and only percentage separating them. Expect a tight contest in Mitcham between two sides that are evenly matched.

Vermont: “Eastern Devils are a great disciplined team, and we will have to be at our best to stop the movement into their forward line,” Vermont Coach Brett Munyward said.