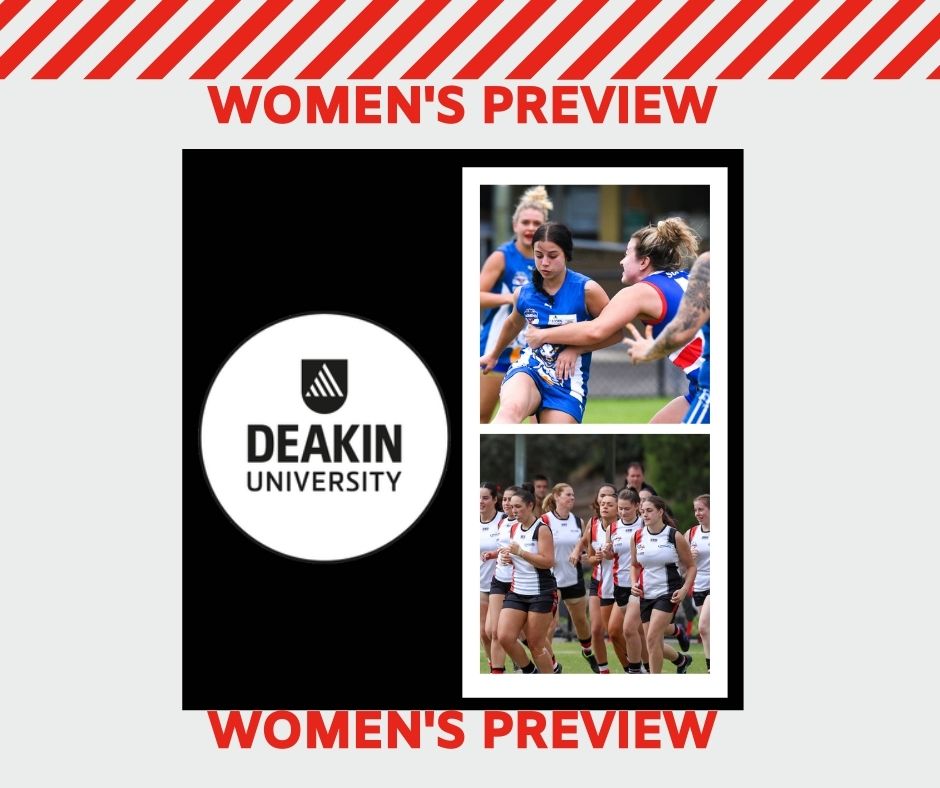 The EFNL Women’s season is in full swing with us entering round five this weekend.

Blackburn vs Vermont: What a way to kick off round five in the Premier Division with the top of the table clash between Blackburn Black and Vermont at Morton Park.

Yes, Blackburn Black will head into the match as favourites as they are yet to drop a match all season but expect this match to be a tough and high scoring contest all afternoon with three of the divisions leading goal kickers playing including Evie Allman (Vermont), Serena Kuo (Blackburn Black) and Amelia Dawborn (Blackburn Black). Do not be surprised if Vermont upsets the ladder leaders and hands them their first loss this season.

Both teams coaches provided their thoughts ahead of the match of the round on Saturday.

Vermont Coach Tim Da Silveria said, “Blackburn and Chirnside seem to be the benchmark after four rounds,” he said.

“After our last quarter fade out against Chirnside, our girls are jumping out of their skins for this clash,”

“We’ve got an enormous respect for Blackburn footy club, and we need to be at the top of our game. We’ll leave nothing in the rooms!”

Blackburn coach Leann Gill said “This should be a cracker of a match and in line with the evenness of the competition we will have to be at our best against Vermont.

“We’ve only played them in 2019 and it is one win a piece. We are going to put the girls on the stretching bench to match their height and are hoping our strengths counteract this.”

In Round Five, the third placed Chirnside Park Black will play against the fifth placed Donvale Black at Kimberley Reserve. You think this match will be a walk in the park for Chirnside but expect Donvale Black to come out firing after a disappointing loss and to not back down in search of their second win. Donvale Black will go a long way to winning this match if they shutdown Chirnside key forward Jessica Provan who has eight goals so far this season. The match for Donvale Black will be won in their defence and also will need to play four quarters of quality football to stay in the contest.

The Basin vs Ferntree Gully: We are blessed in round five in Division One, as we also have a top of the table match with The Basin and Ferntree Gully taking on each other.

There will be a first spot up for grabs for Ferntree Gully and The Basin will know that Ferntree Gully will come out firing to take top spot from them. As this clash is between two of the division’s heavyweights, expect this match to be an enthralling matchup.

On Saturday morning, it will be the battle between the east and north of Ringwood at Quambee Reserve with the Roos and Saints battling one another. With both teams sitting with one win apiece, expect this match to be fiery from start to finish, as East Ringwood and North Ringwood fight to record their second victory of 2021. Could East Ringwood secure their second victory in a row or will North Ringwood get back on the winners list? Park Orchards will play on their home deck against Boronia Brown at Stintons Reserve. Both teams are evenly matched with Park Orchards ahead in fourth spot with a higher percentage of 93.20 compared to Boronia Brown’s 58.74.

Do not think a low percentage would bother Boronia Brown, because a win on Saturday morning means they will move to fourth on the ladder. With fourth spot on the line this will be a driving factor for Boronia Brown, so Park Orchards will be on their guard and therefore expect this clash to be high intensity.

SBL Wolves vs Rowville: Rowville and SBL Wolves will both be vying for their first victory when they clash in the afternoon at Belgrave South Recreation Reserve. One certainty we know is one team will come away with the four points for the first time this year, but the question is which team will it be? If Rowville play in the form that saw them take out the South Division premiership way back in 2019, then SBL Wolves will have their work cut out.

Surrey Park vs Heathmont: With only percentage separating Surrey Park (third) and Heathmont (fifth) on the ladder, expect both teams to give it their all when they compete at Surrey Park Reserve. The winner of this game will likely lock in third spot on a hotly contested Division Two ladder.

Knox vs Kilsyth: Knox will host Kilsyth on Saturday afternoon at Knox Gardens Reserve. Knox will need everything to go to plan against Kilsyth if they are a chance to cause an upset. Do you think Knox can cause one of the upsets of the season and defeat the second placed Cougars?

Montrose vs Ringwood: In the Saturday twilight match at Montrose Recreation Reserve, Montrose will need to play their best four quarters of football to become the first team in 2021 to topple the undefeated Ringwood. Montrose will need to stand tall defensively and put a halt to Ringwood forward trio and the current top three leading goal scorers, Olivia Ashcroft, Georgia Fairbairn and Caitlin Tayleur.

Fairpark vs Croydon North MLOC: Fairpark and Croydon North MLOC are two evenly matched sides and on Saturday morning down at Fairpark Reserve, expect the match to go down to the wire. Fairpark’s backs will need to stop the influence of Croydon North MLOC forward and second on the leading goal kicker leader board Gabrielle Zappia and Croydon North MLOC will have a better chance of winning if they put a halt to Fairpark Libby McNay’s (fourth on the goal kicking list) goal scoring impact. The team that holds up well defensively for four quarters, will go a long way to winning this match. Blackburn Red vs Boronia Gold: The bottom placed Boronia Gold will have their work cut out when they come up against the third placed Blackburn Red at Morton Park. On paper this match looks like it will be a one-sided affair in favour of Blackburn Red, but who knows this Saturday could be the time for Boronia Gold to cause the massive upset of the season.