BLUES COME FROM BEHIND TO STUN LAST-GASP ROOS 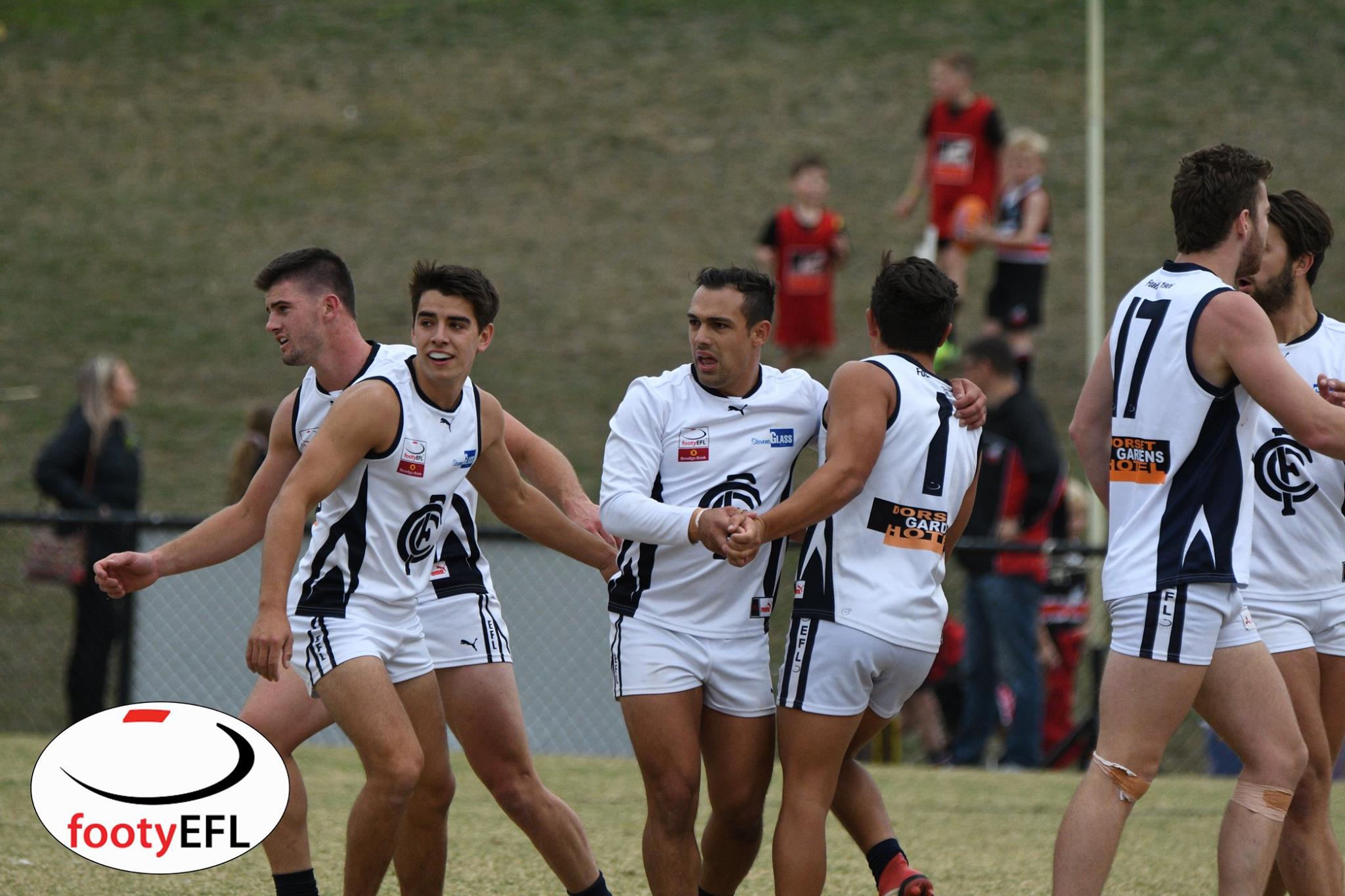 CROYDON’s Justin Ficorilli slotted four goals in a nine-point win against Division 1 rivals East Ringwood to launch his side into third place on the ladder.

Despite keeping the margin within two goals, Croydon trailed at every break and at times looked in danger of succumbing to intense pressure caused by the sheer number of East Ringwood inside-50s.

As the Roos continued to bomb the ball into their forward line, the Blues’ backline refused to buckle, withstanding an intense barrage as East Ringwood locked the ball in their forward half for the first 15 minutes of the third quarter.

But while Croydon’s back six repelled waves upon waves of East Ringwood entries, it was the opportunistic Ficorilli who had the uncanny ability to pop up in times of need, as he jagged a late goal to shave the deficit to just three points at three-quarter time.

Fellow forward Jake Christie (two goals) had a similar sense of occasion, booting a goal within the opening 20 seconds of the final term, before adding another five minutes later to give the Blues a nine-point lead.

In a game where so far neither side had managed to string together more than two consecutive goals, Ficorilli slotted his fourth of the day and Joshua Bolton kicked his first goal of the season to give the Blues a game-high 21-point lead.

Closing in on the 19-minute mark of the final term, Croydon’s lead looked virtually unassailable until East Ringwood launched a devastating offensive flurry of their own, led by man-mountain Dean Cleven.

The Roos’ giant who had been dominant all day in the ruck, marked 40 metres out and slotted a goal from the boundary on the most improbable of angles.

Inspired by his own work, Cleven headed back to the middle to provide the Roos’ midfielders with silver service from the ball-up, who in turn presented powerful forward Andrew Renton the opportunity to kick his fourth goal of the contest via a free kick.

The catalyst for so many of East Ringwood’s forays forward throughout the contest, Cleven was now determined to put the team on his back, as he tapped the ball into the path of Chris Cerni with pinpoint accuracy from the restart.

Streaming through the middle of the ground, Cerni fired a laser inside-50 for the crumbing Matthew Sharpe (three majors) who snatched the Roos’ third goal within two minutes of game time.

Now trailing by just three points with minutes remaining, East Ringwood had their rapturous home crowd giddy with the anticipation of a boil-over victory.

But just as it seemed inevitable that the Croydon’s defensive dam walls would finally burst, the Blues’ heroic last line found the will to repel one last searching ball from the Roos’ midfielders, rebounding the ball back out to Ficorilli on the wing.

Just as he had done all day, the Blues’ four-goal hero stood up against the tide of momentum, dinking the ball perfectly into the path a teammate inside 50 who straightened up and kicked truly to drive a dagger into the hearts of the Roos’ faithful.

With the victory, Croydon has now won its third-straight game to put the 98-point Round 2 loss at the hands of Doncaster East in the rear-view mirror.

East Ringwood hosts Park Orchards in Round 6, while Croydon can look forward to a top-four clash with Wantirna South at Croydon Oval.