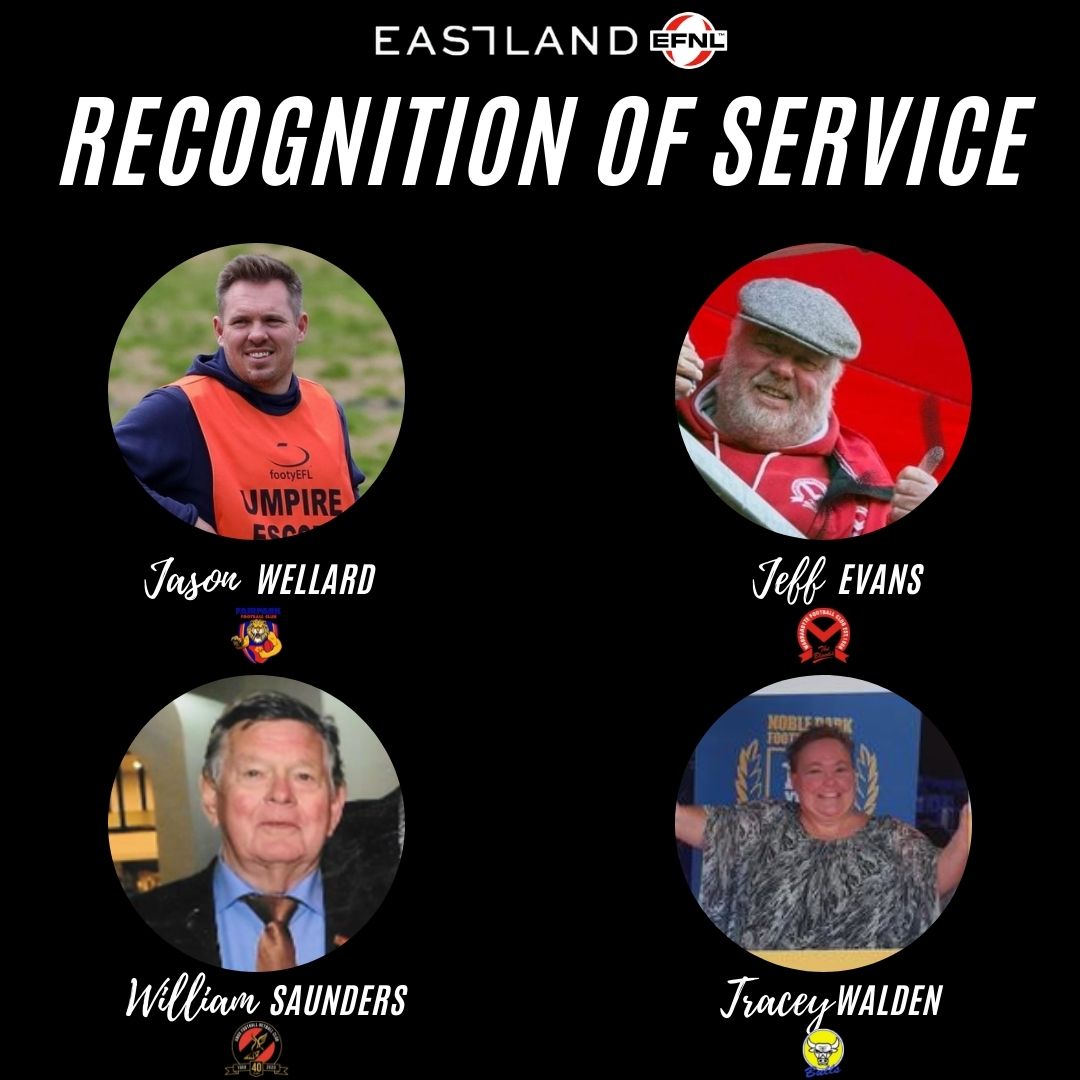 Jason Wellard (Fairpark), Jeff Evans (Warrandyte), Tracey Walden (Noble Park) and William Saunders (Knox) have all be recognised for their tireless efforts in facilitating and improving the quality of their clubs and the competition over the past decade or two.

Wellard has been involved with Fairpark for almost two decades taking up varying roles from including a stint as club President from 2010 to 2012.

Wellard has been particularly influential for the Lions as the club’s Under 19 Team Manager, a role he has undertaken for over 15 years. Across this period he has played a major role in making Fairpark a more family friendly, inclusive and community based club.

Jason’s contribution to the Fairpark Football Club has surpassed all expectations and this Recognition of Service Award is more than well deserved. Warrandyte’s Jeff Evans has been a part of the furniture down at the Bloodbank for almost 40 years.

He joined the club committee in the early 1980’s and remained a part of the committee until 1988 when he stepped away from the officialdom. He couldn’t stay away for long however, returning to the boardroom in 1996, filling the role of club Treasurer.

He performed this task for just one year, stepping into the Presidency the following season, a job he undertook from 1997 to 2001, before stepping back to become another active member of Warrandyte’s committee/match day volunteers, until 2016 when he returned the role of club Treasurer, a title he still holds.

Jeff’s passion for not only the Warrandyte Football Club, but the Warrandyte community as a whole makes him a more than worthy recipient of this Recognition of Service Award. If you’ve been to Pat Wright Senior Oval over the past couple of decades, you’ve come across Tracey Walden.

The Noble Park Life Member bought up her 20th year as club Secretary in 2021, with her unwavering passion, accompanied by a strong attention to detail, a true testament to not only Tracey’s character but her love and dedication to the Noble Park Football Club.

Tracey received her Life Membership in one of the Bulls recent Premiership years – 2011 – and she receives this Recognition of Service Award in a year where the Bulls threatened to challenge for the Premiership once again. William ‘Billy’ Saunders has made a massive contribution to the Knox Football Netball Club over the past 25 years.

Saunders has shown his versatility throughout the years, working as part of the club’s committee, cutting more than his fair share of game day bread rolls and putting his hand up to operate the scoreboard each and every week.

Billy has been an invaluable member of the Knox Football Netball Club, who was always willing to help in whatever way was needed.

Billy has decided that 2021 will be his last and this Recognition of Service Award is another way for both Knox and the EFNL to show the appreciation for all he has done over the years.